Robert and I have finally given up on house hunting! I’ve finally put my dreams of a seven room apartment on hold, and I’m going to embrace the art of small space living in Europe like I’ve never embraced any aspect of European living before! (Except maybe the six weeks paid holiday.)

When I first moved to Denmark, I was shocked by the tiny apartments, and wondered how people managed to live in such small spaces. Fortunately, I’d found a 108 square meter property with awesome space, which had been renovated to a high standard, so I didn’t have to find out. But I quickly learned the small space living in Europe is the norm. 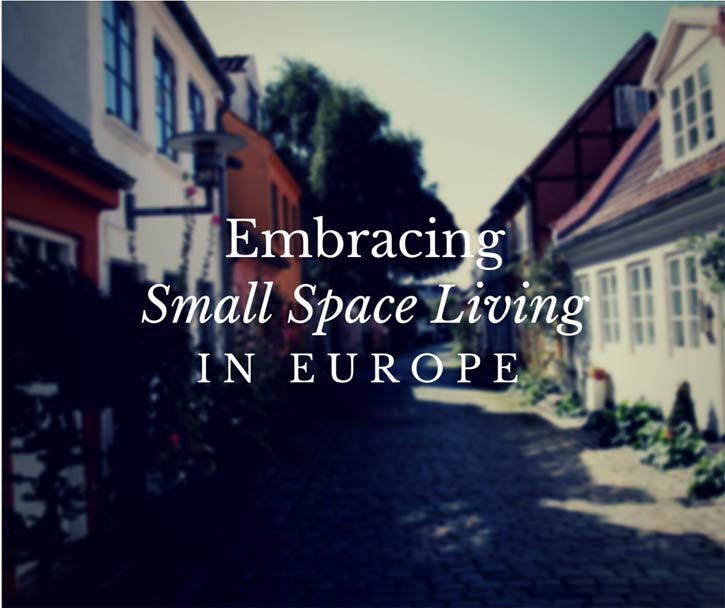 Ever since Robert and I got together, we’ve been stuck in transition. First, we’d traveled back and forth, an hour each way, splitting our time between both of our places. Then, I sold my apartment by the skin of my teeth and moved to Aarhus. But we just sort of haphazardly merged belongings and never established a proper home together because our medium term plan was to move to England, and we totally gave that a try and failed. Then we’d searched, and searched, and searched, and searched some more for our dream property, and came up empty handed. You have no idea the number of places we’ve been to see that never even hit the blog because I didn’t want to bore you with our never-ending house hunting woes. It was killing us!

The thing is, with small space living in Europe being the norm, there aren’t many seven room city centre properties to be found because most of them have been sub-divided. We’d talked about an urban homestead and were leaning in that direction, but ultimately, Robert has come around to my idea that we’re apartment people, not house people. And if we should buy anything, it should be a big apartment in the city centre.

Recently, one late afternoon over an elderflower cocktail on the balcony, Robert and I asked each other the most obvious question… “why are we so set on moving anyway?”

Aarhus is the 2017 European Capital of Culture, and it really is a happening international city. We’ve even got a few Michelin stars knocking around! Staying in our current place is both the most and least obvious choice. On one hand, we own a paid off apartment in one of the city’s most desirable neighborhoods. On the other hand, we’d both like more space and better neighbors, and I’d love a kitchen garden. However, we both enjoy our mortgage free lifestyle, and we don’t relish the idea of Saturday mornings at the DIY store.

The prospect of taking on a mortgage and having to renovate two to three bathrooms, plus a kitchen, plus the additional expenses associated with running a bigger property inspired the conversation that has completely altered the direction of our lives, for now. On balance, moving to a bigger place would not be a lifestyle upgrade, and so, small space living it is!

This all went down over Easter and we’re in the process of selling most of our furniture and severely editing our belongings because someday is now and we can’t continue to live amongst the shared clutter of our past lives.

Our plan is to replace most of our furniture with mid-century Danish designer furniture, install a claw foot bathtub and a hex tile floor in our tiny bathroom, decide what to do with the kitchen, and figure out how to live as two adults, a teenager, a cat, and a business in three rooms totaling 86 square meters. Once that’s sorted out, we’ll have a fashionable (if small) place to live, plus a huge budget for travel, antique jewelry, tailor made clothes, designer handbags, and whatever else we decide.

It’s so not ideal. At this point in my life, I never thought I’d be content living in a three room apartment but after almost three years, we’re tired of living in a constant state of flux. We both feel so at peace since deciding to stay put and I’m excited to see what I can do with the place, and whether or not I can fully embrace the small space living in Europe lifestyle.

The Dream Lives On

We haven’t completely given up on upgrading. We have our eye on a specific building, which was initially built as a hotel in conjunction with the National Exposition of 1909, and later converted to posh apartments. If an apartment should ever open up in there, we’re prepared to pounce, but it could take years for that to happen.

In the meantime, staying here will allow me to get my freelance business established, and we’ll be able to save money at an insane rate, so that when an apartment does open up in that building, we’ll be able to grab it without any worries. Meanwhile, it’s not like we’ll be suffering.