Six years ago last week, Opie and I landed in Denmark. As I’ve written over the past six years, my life here hasn’t always been easy, and Denmark and I haven’t exactly been soulmates.

But it’s getting better. Aarhus is a beautiful and charming city, which is like night and day different from the Jutland town I lived in for my first four years in Denmark. But I think most of it comes down to changing my perspective. After our move to England fell through, I posted about shifting the way I think about this place. I’m about six months in on that project and I am in fact finding things I love about Denmark.

The failed England move, and subsequently, our decision to embrace small space living and to stay in the city instead of looking for a house on the outskirts has highlighted the good things about living in Aarhus, and in Denmark.

That said, a lot has changed in the past six years, not just for me personally, but in Denmark. Denmark is becoming more international, or at least Aarhus is, probably due to the huge international influence of the University. More and diverse products are coming into the shops, everything is in English and Danish, the hot dog stands are starting to sell vegan sausages, and despite the fact that I clearly don’t look Danish, I don’t feel I stick out quite like the sore thumb I did a few years ago.

Maybe it’s just that after living here for six years with only one trip back to the States, I’ve finally adapted. I still don’t like Scandinavian modern design, their politics still make me cringe, but then again, take a look at America, and who am I to throw stones? I still buy the majority of my clothes and cosmetics abroad, I still think the taxes are insane, and prices are out of control, but aren’t there positives and negatives to living anywhere?

Five Things I Love about Denmark 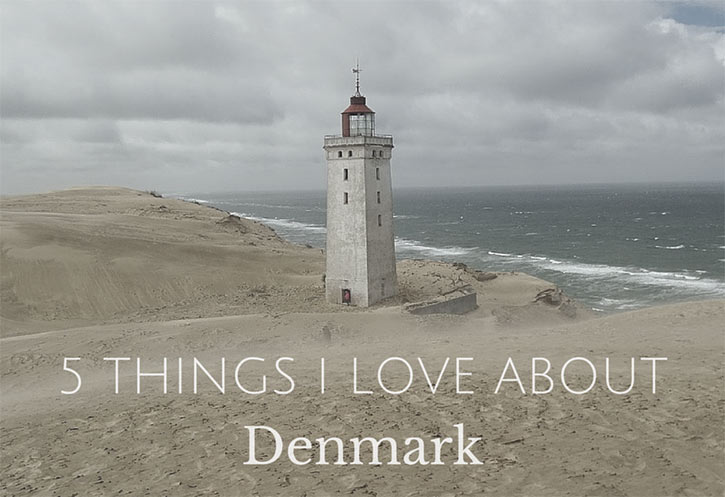 I’ve spent six years harping on my struggles, now let me tell you five things I love about Denmark…

This is huge! We live in the centre of Denmark’s second largest city, and I usually walk around wearing upwards of $50,000 worth of jewelry and carrying a conspicuously expensive handbag, yet I have zero worries about being robbed. That probably sounds insane, but that really is how it is here. I have more of a chance of my bike being stolen from in front of our building by a drunk guy on a Saturday night than I do of being mugged.

And it’s a great place to grow up. During all of last summer, we let my then thirteen year old stepson hang out downtown, at the local amusement park, and at the beach with his friends, take the bus alone, etc., and we never worried about his safety. Last weekend, he attended a teenage gathering in a park until 1:00 am. The cops showed up, asked what they were doing and when they were planning to wrap it up. Satisfied with their answer, they promptly left. And rightly so, the kids were peacefully hanging out, talking, listening to music, grilling, playing football, and having fun. Mind you, the sun doesn’t set until around 9:30 PM these days, so our perception of “late” is a bit skewed.

Another huge one! When I worked the corporate job that had initially brought me to Denmark, I worked a flexible 37.5 hour week, and worked from home on Fridays. In a managerial position making a six figure salary, I can remember a handful of times I worked overtime. And when I did work overtime, I was allowed to take an equal amount of time off.

As a freelancer, working over the weekend makes me a superstar to my Danish clients, and it allows me to clear the deck for new assignments in the coming week, which ultimately means that I make more money. This is one area where Denmark is a match made in heaven for this American-trained capitalist. On the other hand, if I tell my clients I’m taking holiday, they tell me enjoy my holiday and they’ll see me when I get back. I don’t stress about losing a client when I tell them I’m taking time off, because time off is valued and expected.

I’m so very fortunate to make a living doing something I love, on my schedule, for clients who appreciate what I do.

I used to get so annoyed by the lack of choice in groceries, clothing, cosmetics, home furnishings, etc. Now I just go with the flow on that. Basic grocery shopping doesn’t take nearly as long as it did in the States because the stores are way smaller, and there are far fewer products to choose from. However, I have to go to several stores to get everything I need, which adds time, but also gives me the chance to take a nice walk around the city. I look forward a few times a week to going to the fancy grocery store, which has free coffee, then walking downtown with my coffee to the Asian shop for tofu, tempeh, etc., and to the Pakistani shop for dried beans, grains, and spices, and back past the shop with the nice bread and good deals on wine.

And fewer choices means there’s less to buy, which means I have fewer, but nicer things. I don’t nip into TJ Maxx on my lunch hour and impulse buy a handbag or shoes, or go to CVS and blow $25 on things that will languish in my cosmetics stash. Instead, with the exception of my secondhand finds, which still make up the majority of my wardrobe, I plan every purchase. I go abroad and buy Louis Vuitton bags, jewelry, designer shoes, and high-end cosmetics because I only have what I need and I love every single thing I have.

There’s also an element of honesty and trust that’s hard to beat. One time, I was about $1 short at the grocery store and the woman said, “just pay it next time you come in.” This was a major grocery store, not a little neighborhood bodega, and you can bet I paid back what I owed on my next visit.

And the other week, I put down my iPhone and wallet down while choosing produce in a busy grocery store, walked off without them, and they were still where I’d left them when I realized my mistake on my way to the checkout! I guess when everyone has what they need, they don’t need to take what isn’t theirs.

I love this! I can schedule doctor’s appointments online, or write my doctor directly, and have a reply within a couple of hours. I schedule all of my hair and spa appointments online, which is extremely handy if I need to reschedule… or decide at 1:30 am on a Sunday that I need a peel and a mani/pedi in the coming week.

The Danish tax system is all online. At first I didn’t like having all of my income and banking information given directly to the taxman, but it’s actually quite convenient. I go online once a year to verify that all of the information regarding my deductions, etc. is correct, and they calculate my return automatically. That sure beats paying an accountant, or wasting hours of my time filling out my tax return like I do for the US.

And Denmark is practically a cashless society. You can even “mobile pay” at flea markets!

It’s taken me six years to come around on this one. I used to scoff at people who worshipped Danish design and I still loathe those overrated Arne Jakobsen Egg Chairs, but nobody does design like Danish mid-century modern. Ever since we decided to sell everything and decorate in Danish mid-century modern, I’ve fallen in love with teak, palisander, and sexy lines. I thought this would be a quick decorating gig, but with so many beautiful pieces out there, it’s become like searching for the next big wave!

Scandinavian modern, though, I just cannot get onboard with. I stand by my loathing of Kahler vases and silly overpriced lamps.

When I moved to Denmark six years ago looking for a change, I expected to travel the hell out of Europe and move back to the States within a few years. I stayed in Denmark longer than planned. I got stuck here partly because leaving was logistically overwhelming, and partly because the economic crisis had limited my options back home. But then I met Robert, and everything changed.

It’s unlikely that I’ll ever move back to the States, so it does no good to dwell on what’s better on the other side of the Pond. I’ve got a guy who loves me, a dream job, and a lifestyle that exceeds every expectation I’ve ever had.

Looking at it from that perspective, none of the stuff that bugs me about living here is worth stressing about. Maybe I’ve adapted, or maybe I’m just older and all out of [email protected]$ks to give. Either way, I’m content with my life, and I’m happy to enjoy the many good things I have instead of dwelling on the things I miss.