I grew up in Connecticut with easy access to New York City, but Europe? Europe was where I’d always wanted to be. I thought that European food was better, that the clothes and cosmetics were fancier, the houses were more interesting, and that in general, life was better and more elegant across the Pond.

During my past six years living abroad in Denmark, I’ve come to realize that everything isn’t better in Europe, and that there are some pretty great things about the States. I’ve only been back to America once in six years, so I could be romanticizing some of these points, or maybe life in the America has changed so much that I wouldn’t recognize it upon re-entry, but here’s my list of five things I miss about America.

Five Things I Miss About America 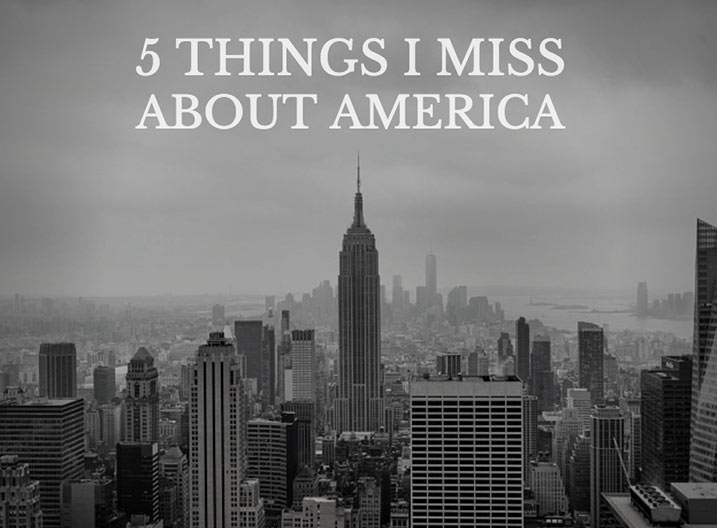 Just about anyone who has traveled to Europe from America is shocked by the outrageous price of pretty much everything. That’s thanks to the VAT, which in Denmark is a 25% sales tax on everything. I can’t believe I used to whine about 6% on some things!

I miss stacking coupons with loss leaders, and buy one get one free deals. In Denmark, there’s pretty much the ridiculous “regular” price, and the sale price. The sale price is in line with regular American prices. There are no coupons, there are no buy one get one free deals, and there are no rain checks. I’ve been stalking a grocery store for its sale on cage-free eggs all week to no avail. Coupons are actually illegal here.

I’m a hardcore secondhand shopper, and I miss the giant American thrift shops full of high-quality, barely used secondhand stuff that were all over the place in Connecticut. I used to buy my clothes there and have them tailored, and it was still cheaper than buying new, not to mention more fun. Danish secondhand shops are tiny, like the size of an American convenience store, and they’re generally filled with tired looking granny items. I have scored some great stuff at Danish secondhand stores, but it’s few and far between.

As a small market, the breadth of products available in Denmark is limited, which means looking abroad for a lot of things. Ordering from the UK is easy because everything is in English, but ordering from other countries is difficult because of the language barrier, and ordering from outside the EU is a no-go because anything above 80 kr., which is about $12, is subject to import duties, and the valuation includes postage!

I miss being able to do all of my grocery shopping in one place. Here, I have to go to the Pakistani shop for spices and dried beans, the Asian shop for tempeh and tofu, one grocery store for some things, another grocery store for others, London for some, and yet another store for health and beauty items. It’s quaint, but inconvenient.

Our failed house hunt has made me appreciate American housing like I never have before. Our apartment is worth upwards of half a million dollars, and even given its premium location, you wouldn’t know it by looking at it. Even in the million dollar range, Danish houses fail to impress me with their small rooms and poor layouts. The high standard of living is definitely one of the things I miss about America.

I miss old houses whose architectural details are still intact, and I miss the many different styles of American architecture. I miss houses with big, well-appointed kitchens, and living in a place where bathtubs are a given, and bathrooms are more than a closet. Denmark takes “water closet” literally. And I miss closets. I don’t understand how people live without closets! A freestanding wardrobe just doesn’t cut it. And window screens. I can’t believe these people are still living without window screens in 2016!

I never thought that at my age and in my financial situation, I’d be living in a three room apartment with a galley kitchen, a dining table in my hallway, a shower cubicle, and a community laundry room. But the fact is, most apartments have been subdivided and had their soul surgically removed by well-meaning renovators, and most houses have met a similar fate. So for now, I’ll settle for no mortgage and a great location. I realize now how fortunate I was to have found my last property when I did. I was spoiled.

Coming from a big, diverse country, to a small, homogeneous one was a culture shock to say the least!

I’m over the lack of choice at the grocery store, but I’m still grappling with the lack of choice regarding clothing styles, cosmetics, and home decor. Robert and I were in Denmark’s version of Home Depot once and noticed that every kitchen faucet they had looked remarkably the same, the main differentiators were price and brand.

And OTC medications pretty much don’t exist here. They sell paracetamol in packs of 20, priced like packs of 100 because people were apparently abusing it. I’ve become a hoarder of cold remedies. That stuff has serious value on the expat market. In high cold season, someone would probably trade me their car for a box of NyQuil. On the upside, Denmark doesn’t have a Crystal Meth problem.

Going to England reminds me of going home. Even in England, there are a ton of options to choose from for everything! We often have things shipped over. Fortuantely, England is considered the EU, so we don’t have to pay import duties, just insane shipping rates. There’d better not be a Brexit this summer to change that.

We go to London a few times a year to restock things we can’t buy here like clothes, cosmetics, OTC medicine, and certain grocery items. It’s actually cheaper to fly over and shop than it is to have things shipped. In fact, we’re headed over later in the week! It’s a real tragedy having to go shopping in London a few times a year, but I still miss having so many things at my fingertips online and around the corner.

4) A Reasonable Daylight to Darkness Ratio

There are only a couple of months out of the year where Denmark’s daylight to darkness ratio is manageable for me.

In the dead of winter, this far North, we have 18 hours of darkness, and the daylight hours are never fully light. This can be incredibly cozy, but it’s also incredibly difficult to deal with so much darkness for months on end.

Summertime is the opposite. We have 18 hours of sunlight, and the night hours are never fully dark. This seemed really cool at first, but Danish summer never sees a night sky and I miss looking up at the stars on a hot summer night. It can also be disorientating because 9 p.m. looks like 6 p.m., and I’m often sure I’ve overslept even though it’s not even 5:00!

Also? I miss summer. When I first moved to Denmark, I was shocked that no one had air conditioning. I quickly learned that there’s no need for air conditioning in Denmark. Danish weather is perpetually stuck in autumn, which is cool because it’s my favorite season, but I wouldn’t mind a few solid weeks of summer.

5) Being from Where I Live

Every time I leave my apartment, I’m acutely aware that I’m not from here. Being 5’2″ with dark hair and eyes is a dead giveaway. I can’t blend in, and I don’t try. Here, I’m the slightly eccentric American chick, and I’m ok with that.

I feel left out at every US holiday. Even when I host Thanksgiving, or go to a Halloween party thrown by a fellow American, it’s just not the same.

I also feel left out at every Danish holiday. There are quite a few holidays in the spring, and I understand their significance, but I just can’t relate to them because they’re not part of my personal history, or my culture. Danes also celebrate Christmas on the 24th in a very specific way, which isn’t our way, so even the same holiday is different.

Denmark isn’t the easiest place to be a foreigner. I’m an “elite” foreigner who came here for work, now I’m self-employed and married to a tenured professor, who is also an elite foreigner, so we are very much integrated and accepted, but the anti-immigration rhetoric is still difficult to hear.

I miss chatting with strangers, having people smile at me on the street, hold the door, or let me out in traffic. I also miss people giving me the “thanks” wave instead of a confused look when I let them out in traffic.

And after six years, the many types of Danish bread still confuse me. And I still don’t understand why they don’t pre-slice their hotdog and burger buns.

How has my experience changed over the past six years?

I have a Danish license and a car now, which I actually don’t need since I moved to the city centre and quit my job. My Danish still sucks, but I can read quite a bit. I can also get through most basic situations, but everyone in Aarhus speaks English and as soon as they hear me mangling their language, they switch to English, which is a blessing and a curse. But I don’t feel as isolated by the language as I once did.

I’ve cracked the beauty code! I get my manis, pedis, facials, and brows done at the beauty college for half the price of a salon or spa. I was so happy with the students’ services that I stupidly tried the haircutting school this past week to disastrous results, and I’m looking into fashionable ways to rock a headscarf until it sorts itself out.

I’ve found workarounds for most food deficiencies, so the lack of vanilla extract, light brown sugar, molasses, decent fajita seasoning, and yellow mustard doesn’t get my dander up quite like it once did. And after so many years of eating whole foods, and expanding my kitchen skills and palate, I’m not sure I’d even want to eat Taco Bell or many of the American foods I thought I couldn’t live without. Food has such strong cultural connotations and expats the world over will always lament the absence of the the things they love from home, but times and tastes change and it’s ok to let it go.

But I am American, and I lived in America for the first thirty-five years of my life. I’ll always miss the towns, the neighborhoods, the people, the food, and the culture. And I’ll always wonder how my life would’ve been if I hadn’t given in to wanderlust.