This (somewhat) healthy baked eggplant parmesan recipe is my improved version of the Eggplant Parmesan with Spinach recipe from Vegetarian Times. As with most Vegetarian Times recipes, I found the original version to be bland. But with a few changes, this healthy baked eggplant parmesan recipe has become a summertime keeper. I say “somewhat healthy” because obviously there are healthier things you could be eating, but as eggplant parm goes, this is about as healthy as it gets.

I grew up in Connecticut around some of the best Italian restaurants and delis outside of Italy. A vegetarian since fifteen, I’ve eaten a lot of memorable eggplant parmesan. I still love traditional eggplant parmesan with its heavy layers of fried breaded eggplant and tons of stringy mozzarella. If I ever go back the States, it’s one of the first things I’d want to eat, along with a couple of Taco Bell bean burritos and a Red Robin Whisky River BBQ Gardenburger, fries and campfire sauce.

But I don’t generally eat like that, so this lighter, more modern and healthy baked eggplant parmesan recipe with spinach and just enough cheese is much more in line with how I eat everyday. 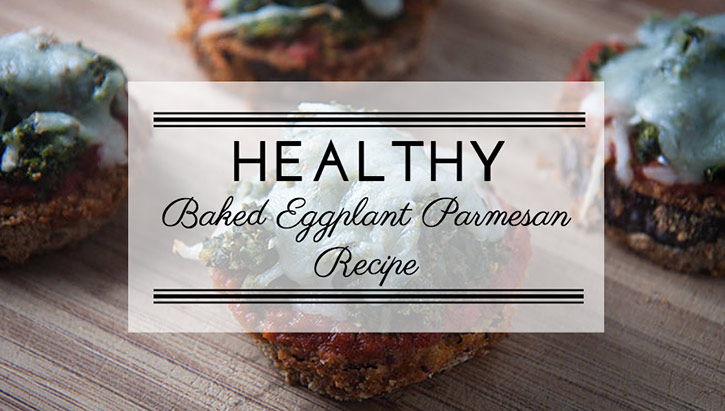 The main differences between my version and the Vegetarian Times version of this recipe are:

Cut the eggplants into ¾-inch slices, sprinkle them generously with salt, and leave them to sweat for at least an hour, but the longer the better. Rinse and pat them dry.

While the eggplant is baking, heat a skillet over medium-high heat. Add a bit of olive oil, then cook the spinach until all of the excess moisture has evaporated. Stir in the cream cheese, Parmesan, and 1 T breadcrumbs and cook the mixture until it’s heated through and thick.

Spread each eggplant slice with a bit of sauce, top with a mound of the spinach mixture and a slice of fresh mozzarella. Put it back in the oven and bake it for 4-5 minutes or until the cheese is melted to perfection.

I love the lightness of this recipe, so while pasta is an obvious accompaniment, I never serve it with pasta. It’s really not filling enough on its own, so I recommend a Caesar salad to go with. Or serve it at room temperature with some bruschetta and red wine.