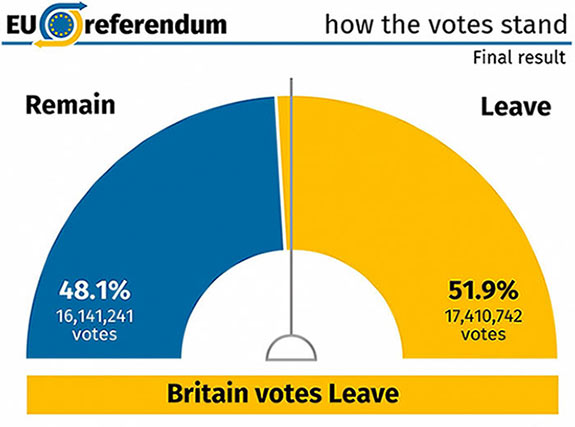 Robert got up at 4 am “EU time” as he calls it now that his country has voted to leave the Union. I periodically checked the results on my phone as I restlessly drifted in and out of sleep. Around 7:00, Robert brought me a cup of tea and somberly announced that Britain voted to leave the EU.

We’d gone to bed with the right to live and work in 28 countries, and woke up essentially seeing that reduced to two. Last weekend was complete panic trying to figure out what happens to expats after Brexit.

Being born into the EU and living on the Continent for so many years, Robert considers himself European. But it doesn’t matter that he speaks four languages and has lived here for over twenty years. As of last Friday, in the post-Brexit EU, he holds the passport of a lonely island.

If the UK hadn’t been part of the EU, Robert would have moved back to England after a semester abroad in the late 90s and our paths wouldn’t have crossed. But it was, so Robert studied in Denmark, got a PhD, stayed as a tenured professor, and built a life here. He’s lived in Denmark for more years than he lived in England, which forfeits his right to vote in the UK. Nevermind that he’s built his entire life on his status as an EU citizen.

Moving the center of his life from one EU country to another gave Robert the right to have me (his non-EU spouse) with him, no questions asked. It was easier for me to get permanent residency in Denmark as the wife of a UK citizen than it would’ve been as the wife of a Danish citizen. Denmark is also part of the EU, but their citizens have their own strict set of family reunification regulations. I wrote about this in depth last year when I became a permanent resident.

As we’ve been told so many times before, we’re not immigrants, we’re expats. Being white with a PhD or being white and American excludes you from being an immigrant. Even if you have no intention of returning to your home country.

Or does it? What happens to expats after Brexit?

Hate crimes in the UK have risen 500% since the vote. Other Americans in social media expat groups I belong to are reporting anti-immigrant incidents towards Americans. Somehow this referendum has given people carte blanche to let their bigoted freak flags fly… 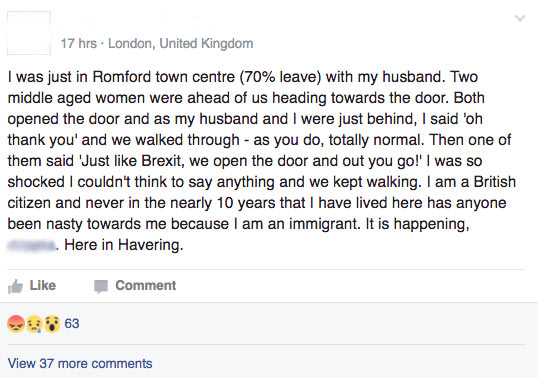 Last night I had a nightmare that someone slit my throat because, “we voted to leave and that means you.”

What happens to expats after Brexit?

We’re of course short on specifics, but very concerned about what happens to expats after Brexit in the post-referendum EU. Fortunately, as far as we’re told, Denmark can’t revoke our permanent residence permits. But our longterm plans are a mess.

Moving to England is now completely out of the question. Last year, when Robert was an EU citizen and we were trying to move to England, immigration was the least of our worries. There was an easy spouse of an EU citizen route back into the country. Now England can do whatever they want, and since anti-immigration rhetoric is pretty much what got us into this mess of leaving the EU, we expect to see the UK enact family reunification regulations similar to Denmark’s. Immigrant or expat, legally, we’re all the same.

Of course, why would we even want to move to a racist, isolated, and divided country that’s revealed its true colors? The town we were going to move to voted 75% in favor of leaving. If we’d moved, I’d have been a pariah. A pariah living in one of the town’s prettiest houses, but still an undesirable.

This makes me so sad because I’ve always had such a high opinion of England. I thought I’d feel welcome and at home there, so much more so than in Denmark. The more I live with Robert and spend time with his family, and the more we visit England, the more I thought that I’d be happier in England than anywhere else in the world. And I don’t think that’s true anymore.

And while we’ve decided to stay in Denmark for the foreseeable future, we never planned to be lifers. We’d talked about moving to another city, maybe Prague or Berlin, or retiring on the shores of Lake Como, but now moving countries isn’t just a matter of a little paperwork. Now there will be language and income requirements, points systems, government deposits, etc.

We’re most likely going to lose our EU health coverage and will have to take travel insurance when we go abroad. With epilepsy and severe asthma, we can’t be too careful.

While Denmark is notoriously xenophobic and hard on immigration, Aarhus is an international city and I’ve never felt unwelcome in Aarhus. I feel foreign of course, but never unwelcome. In over two years of living in this city, I can’t recall a single negative experience.

Denmark recently started allowing dual citizenship, so that option is on the table for Robert, but it’s not our first choice. Before we go down that path, we need to be 100% certain that it will not affect my immigration status. Then there’s the ethical dilemma of getting a citizenship just to keep EU status.

So, what happens to expats after Brexit? It’s anyone’s guess, really. Robert and I lucked out meeting, marrying, and settling in Denmark when we did. I wouldn’t want to be in Europe as a non-EU spouse married to a Brit without permanent residency these days.

We’re watching and hoping they’ll put it to another vote. Yes, selfishly because we want to stay in the EU. But also because we believe the media and politicians acted irresponsibly in the run up to the referendum.

Nigel Farage admits lying and that hundreds of millions of Pounds were never going to be redirected from the EU to the NHS as promised, not to mention a host of other lies that were told leading up to voting day.

The Daily Mail, the Sun, and other rags of similar ilk all promoted the Leave campaign.

Now that the vote is over, and they’ve finally reported the actual implications on people’s bank accounts, pensions, and holidays, people are understandably angry. But it’s kind of their own fault. This is why I get my news from more than one source.

The referendum results aren’t binding, and article 50 is yet to be invoked. In light of the slim margin, the lies, and the fact that Scotland and Northern Ireland voted overwhelmingly to stay, we’re hoping that in the end this won’t be any more than a cautionary tale. While the UK voted to leave with a slim 3.8% margin, half of its countries voted to remain, and an untold number of citizen expats weren’t even allowed to vote. That’s gotta count for something.

For now though, I’m sort of enjoying not being a citizen of the world’s most embarrassing country. I just hope I can still say that in November.