Closet space has been one of my biggest homemaking challenges in Denmark since day one. I actually blogged about this exactly 26 days after picking up the keys to my first Danish apartment.

Many Aarhus city centre apartments come with storage space under the roof, but my current building traded its space a few years ago to finance a new roof and windows. It made good (if shortsighted) sense to make this trade. The owners’ association saved a bundle and the contractor made a killing by converting the under roof space to in-demand apartments.

I have stuff stored under and behind every possible piece of furniture! I have shelves hung in odd places like over the bathroom door,  I actually store stuff in my luggage when I’m not traveling, and opening any one of my kitchen cupboards could cause a deadly avalanche! 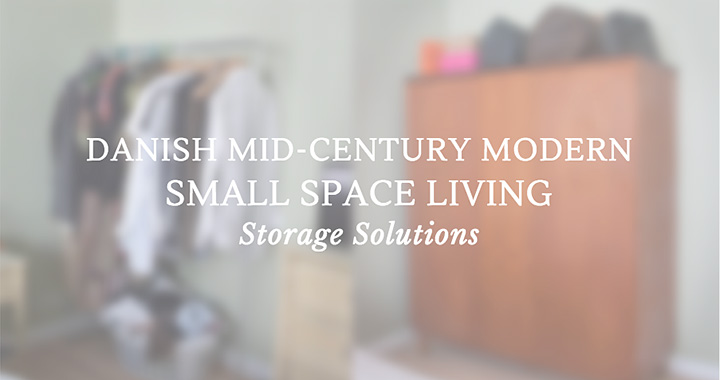 I’d love to tell you that I’m clever enough to have cracked the small space living storage code and have like 1001 small space living storage solutions to share with you, but I haven’t. Instead, I’ll show you how I’ve managed to tidy up one out of control corner of the bedroom, then I’ll show you a pretty piece of Danish mid century modern furniture that’s almost a panacea for my storage woes.

The previous owner thought he was brilliant for buying pipes from the hardware store and screwing them together to form a clothes rack. I’ll give him a “B” for creativity, but look at this clutter! It’s been the bane of my existence since I moved in over two years ago.

Fortunately, I’ve finally found a Danish mid century modern teak wardrobe, and this clutter is a thing of the past! 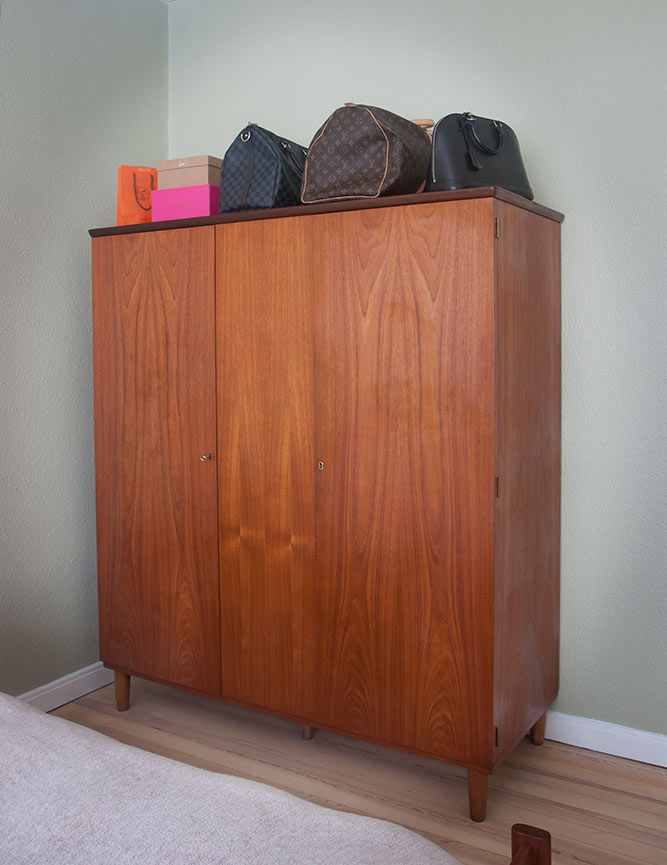 This wardrobe is awesome! Its footprint isn’t that much bigger than the DIY clothes rack it replaced, yet it hides the laundry basket and holds quite a few more hanging clothes. It also has five shelves to house my shoe collection, and I can store luggage, handbags, shoeboxes, etc. on top of it.

I also found this awesome Danish mid century modern sideboard (“skænk” in Danish), which has solved many of my storage woes.

I use it to store everything from records to photography equipment to groceries and kitchen tools!

My biggest issue with small space living is the clutter. No matter how much I try to keep clutter under control, there’s always more clutter.

I have a counter full of groceries that can’t fit into the cupboard. There’s a pile of books next to the bed because I don’t have space for a bookshelf. My desk is cluttered with papers because I work from home… in the living room. And there’s a perpetual pile of shoes by the door because there really isn’t anywhere else to put them.

My second biggest issue with small space living it that I don’t have room for my hobbies.

My sewing machine is always packed away and when I do dig it out, it takes another 45 minutes to locate my thread, cutting mat, and other accoutrements. Then everything needs to be packed away again, so working on an actual project is pretty much impossible.

My photography gear is mostly packed away, but I keep one of my cameras set up on a tripod so it’s ready to go. Or was ready to go… until one day while I was moving furniture around and I knocked the tripod and smashed one of my lenses. My camera body survived, but I’m down a very expensive 1.4 aperture lens, which wasn’t covered by insurance, plus there’s a huge knick in the floor where it hit.

I exercise at home and drag out my mats and weights every morning, then put them away, but they can’t really be stashed completely out of sight, so they’re a constant eyesore in our living room.

To sum it up, I’m trying to make the best of a not so ideal arrangement… and I get some pretty furniture as a consolation prize.