So our current apartment went on the market this past week, and I was blown away by how great it looks in the photos! But this place used to be a disaster because it was full of clutter and I’d inherited the biggest decorating mistake ever… furniture that was too big for our rooms.

Clutter and Robert’s too big furniture have been causing me grief for over two years. But it’s an epidemic. Despite Scandinavia’s small living spaces, Scandinavian modern furniture is huge! Nearly every property we’ve seen has been stuffed to the gills with gigantic furniture. After living in Denmark for nearly 20 years, Robert had been brainwashed.

Right after Robert appointed me ‘Minister of the Interior’ last spring, I sold pretty much all of his furniture. I replaced most of it with Danish mid century modern pieces of an appropriate size for our rooms. Danish mid century modern furniture has saved my life as I worked on reversing Robert’s biggest decorating mistake because it’s beautiful and its lines flatter small spaces. Even with a hefty piece like our wardrobe, there’s still a fair amount of air around and beneath it.

I shared our dining area makeover a few months back. Now, I’m going to show you our bedroom and living room makeovers.

I’m utterly embarrassed to even share these pictures in public, but I promised to post pretty revealing before pictures, and now I’m delivering. In our defense, this was supposed to be a temporary living arrangement, so it didn’t make sense to buy and sell furniture, declutter, decorate, etc. Then our situation changed… drastically.

Before: Our Living Room

Shamefully, I didn’t take this picture as we were moving things around, this is literally how the room looked 24/7.

As I’ve written before, I exercise at home. This room was such a sh*thole that I just couldn’t be bothered to put my exercise stuff away when I was finished. And anyway… where could I have possibly put it? 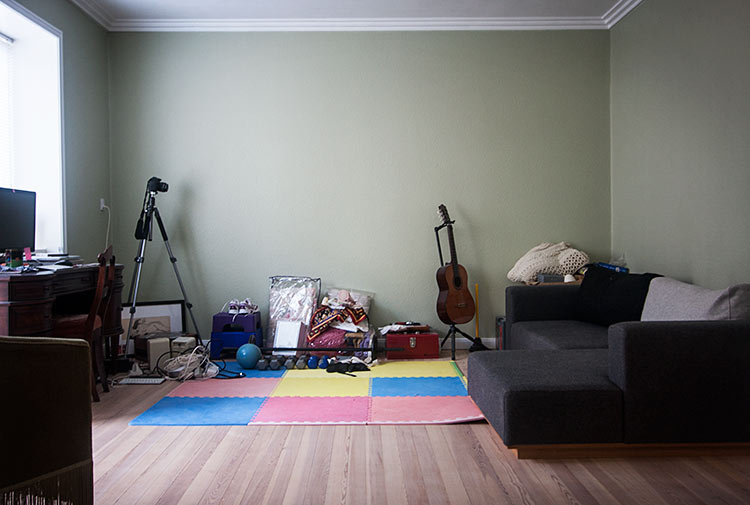 Is that enormous sofa like the biggest decorating mistake or what?

This is what happens when you don’t have storage space, and you buy furniture that is just too big for your room. That eyesore of a sofa actually comes from an expensive Scandinavian modern furniture store and it was quite comfortable, but it just did not work with the proportions of the room.

I drive Robert crazy by saying, “<insert something here> sucks my will to live,” but this mess really was sucking every shred of motivation and creativity out of me. Imagine trying to start and run a creative business amidst this chaos!

It’s not as horrible as the living room, but there are clutter issues, a definite mismatch of styles, and the bed was a relic of Robert’s big Scandinavian modern furniture buying days.

The nightstands, dresser, sofa, small table, and the dressing table that you can sort of see off to the right were part of my “you’ll sell it over my dead body” collection. The only items to survive were the sofa and the little table. Marriage is about compromise.

Again with the clutter and too big furniture!

The first thing we did was to paint the rooms. Robert was a big fan of white walls, but if you’ve been reading Sage & Simple for awhile, you probably know that I love color! I’ve had a purple hallway and a pink living room, so it’s pretty obvious where I stand on this issue.

We agreed on that sage green color, which really made the crown moulding pop! We painted both rooms the same color in order to make the space seem bigger.

We live on the first floor of a five story building and our bed used to share a wall with our building’s front stairway. There’s a lot of foot traffic up and down the stairs at all hours and the front door buzzes every time someone comes in. I hadn’t had a full night’s sleep since before I moved in here!

So we finally swapped around the living room and the bedroom. And do you know why we didn’t swap rooms sooner? It was because that gargantuan Scandinavian modern sofa was too big to fit in the other room! I was sleep-deprived for nearly 2 years because of a humongous sofa. Can you believe that insanity? 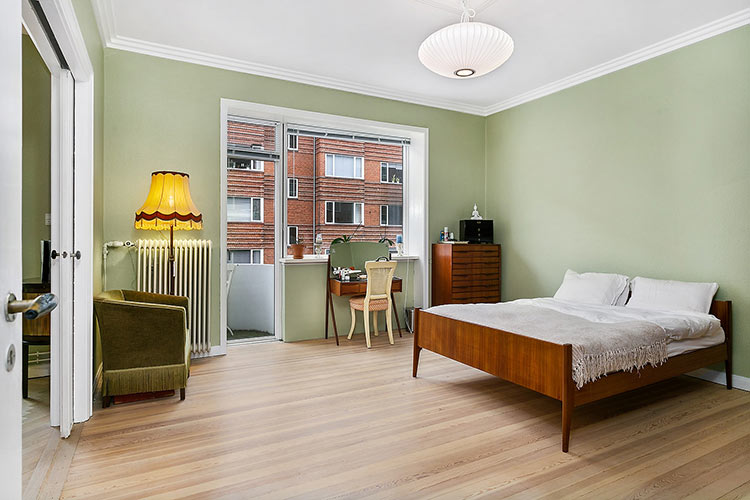 If we were staying here for longer, I would’ve gotten a rug, replaced the velvet chair and lamp with mid century modern versions, and bought a hardsided Louis Vuitton suitcase for extra storage at the foot of the bed. But all in all I can’t believe the transformation from quite possibly biggest decorating mistake I’ll ever have to deal with, to a stylish mid century modern bedroom! 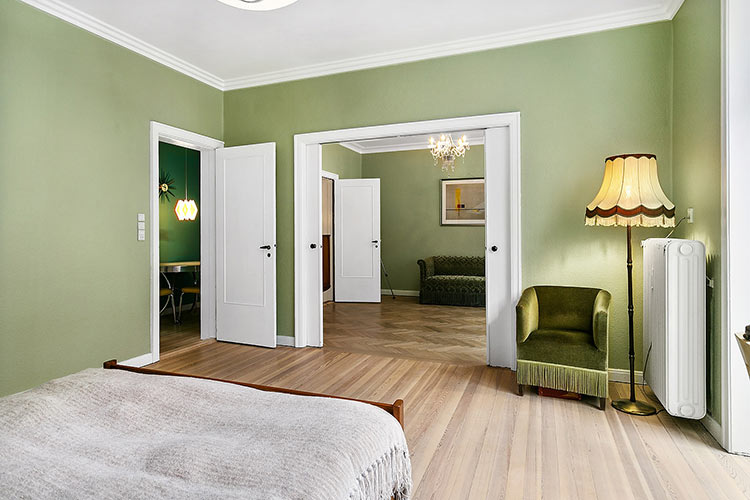 The third room is on the back of our apartment facing a closed community garden. It’s actually the best sleeping room in the apartment because it’s quiet. But because of the pocket doors between these two rooms, the third room was given over to guests and my stepson. It made sense and didn’t make sense, and it irritated me to no end. But I digress… our new bedroom will be on the back of the building.

One thing I’ve learned from these two rooms is that when we choose the floors for our new place, the herringbone parquetry will run vertically through the living room and my office, which will be joined by a set of doors. Our current building was built as affordable housing for dockworkers in the 1930s, so it’s a miracle that it’s got herringbone parquetry at all. The walls are so thin that I can hear my neighbors sneeze!

Just as we did with the George Nelson Sunburst Clock in our dining area, we saved quite a bit (1,080kr./$158) by ordering the George Nelson Bubble Lamp from Germany. It’s a beautiful piece of design and I have no regrets about spending over a third of our decorating budget on a lamp!

After: Our Living Room (Bonus)

Well… I never actually got a good decorating hold on this room. Aside from the Danish mid century modern sideboard, everything in this room is left over from my last apartment. 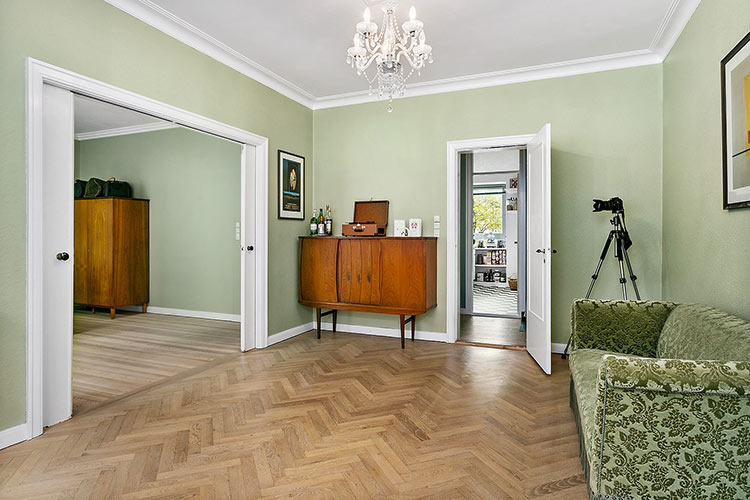 I was hunting for a Danish mid century modern sofa, coffee table, a couple of chairs, possibly a lamp, and a cantilevered desk, but we found our new apartment before I found those things.

My biggest decorating challenge has been finding appropriately sized furniture for this room. I must’ve seen a couple dozen beautiful sofas and desks, but they were just too big for the space. It doesn’t matter how beautiful a piece looks or how much I love it. If it’s too big for the room, buying it would pretty much be the biggest decorating mistake ever! I’m relieved that this won’t be as much of an issue in our new place.

Even though I didn’t get the chance to finish this room, timing worked out in my favor. If I had found a desk and a sofa, I would’ve had to sell two pieces that adore. Now, I can bring them to our new apartment and have them in my office.

So where did all of the junk go?

We sold quite a bit of it. One of the upsides of the insane cost of living in Denmark is that there’s a thriving secondhand market. I plan to take full advantage of this when I furnish our new place.

A lot of the junk was moved to the third room, which was interesting when the real estate photographer came around. He’d shot those two rooms and was working on the kitchen as Robert was feverishly moving all of the junk from there to our bedroom and I was moving furniture around, curating lamps, orchids, etc. from other rooms, and swapping out my stepson’s Liverpool duvet for something a bit more photogenic. 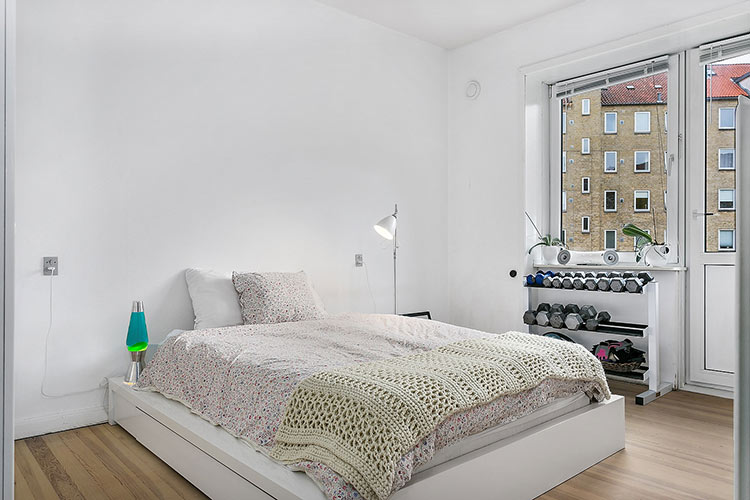 Fortunately it worked, though that massive bed frame still plagues me!

St. Joseph is buried upside down in a flowerpot and we’ve had a ton of interest in the place and showings all weekend as well as today. We’re storing all of our junk in Robert’s office until we get the keys to the new place and can move it to our storage area.

If only I’d started sooner. As thrilled as I am to be moving to a much bigger and nicer apartment, I’m slightly disappointed that I won’t have the chance to bring this one to its potential.

Robert chose this place when he was on his own and he loves it, but living here as couple has been a struggle because our needs and preferences are so different to his criteria when he bought it. And we’re excited to finally move on and start our life in a home that we chose together.