We sold our current apartment for almost asking price after only 11 days on the market! I’d like to think it was because of my mad decorating prowess.

When we decided to start renovating an old apartment, I had so many plans for how this project would go. I’d have beautiful Pinterest boards full of ideas for every room. I’d have mood boards. I’d bring cake for the workers and be there every day to document the work as the place took shape. In the unfinished space, Robert and I would have cheese and wine picnics by candlelight as we looked at Christmas lights in the windows across the street.

In reality, I’ve been working 7 days a week, 50+ hours a week for two months. I don’t sleep more than a few hours a night, and I’ve been to the new place like four times since we got the keys on November 15th. My Pinterest boards stalled sometime in September. The builder is starting on the bathroom this week and I still haven’t ordered tiles or picked fixtures.

There’s no time to waste when renovating an old apartment on this scale, so we’d hired a general contractor as soon as the ink was dry on the contract. We started getting our ducks in a row so everything would be ready to go the day after we got the keys. Then the GC dragged his feet on getting us estimates and timelines and two weeks after getting the keys, work still hadn’t started. So we had to start over, but now there’s a Danish restoration specialist and a small army of brilliant Eastern European men working fulltime to get the place ready.

And it’s a good thing because after years of being a neglected rental property, it’s going to take a fulltime army to get this mess in order…

Renovating an Old Apartment: My Office 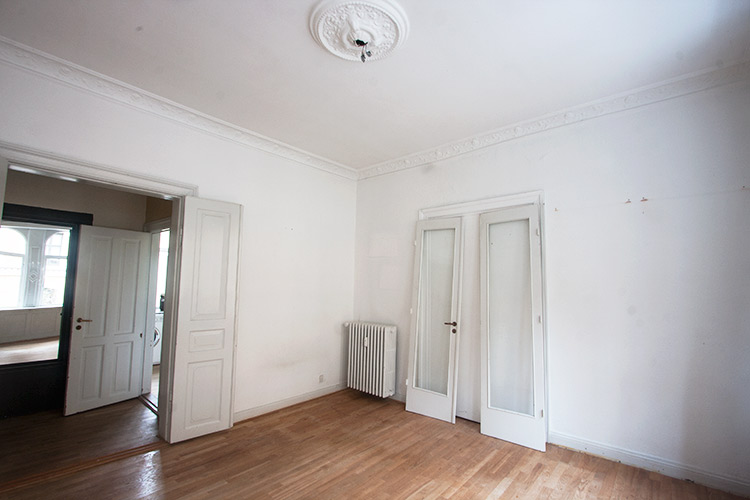 As I mentioned in a previous post, we’re reopening that doorway and having herringbone parquetry installed in both my office and the livingroom. The estate agent had said that the original doors leading from my office to the living room were in storage. Unfortunately, these aren’t the original doors, so we’re having replica doors made following the pattern of the double doors leading from the entryway into my office. 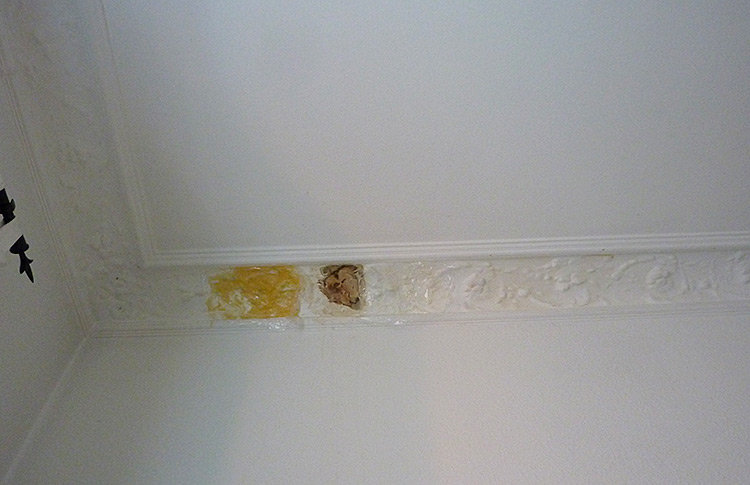 If you follow me on Facebook, you might’ve seen the photos I posted of this coving last week. It’s covered in 5mm of paint and the restoration specialist trying to figure out the best way to remove the paint without damaging the coving. She’s never seen this type of material before, so it’s slow-go. Once she removes the paint, she’ll make new paint from scratch in the way it would’ve been done when the apartment was built in 1899, and repaint it. 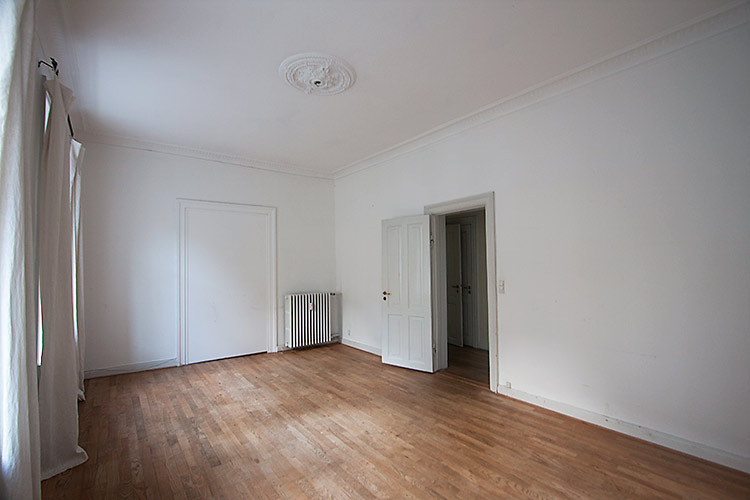 The living room coving is made of plaster, so that’s a bit more straightforward to restore. All of the walls in the apartment are covered with hideous textured wallpaper from the ’80s, which has been painted. That all needs to be stripped and the walls have to be replastered without disturbing the coving, which is very fragile. All of the skirting boards are original to the apartment and they’re covered in almost 120 years worth of peeling paint, so they need to be carefully removed, stripped, painted, and reistalled after the floors have been installed.

Renovating an Old Apartment: Our Bedroom 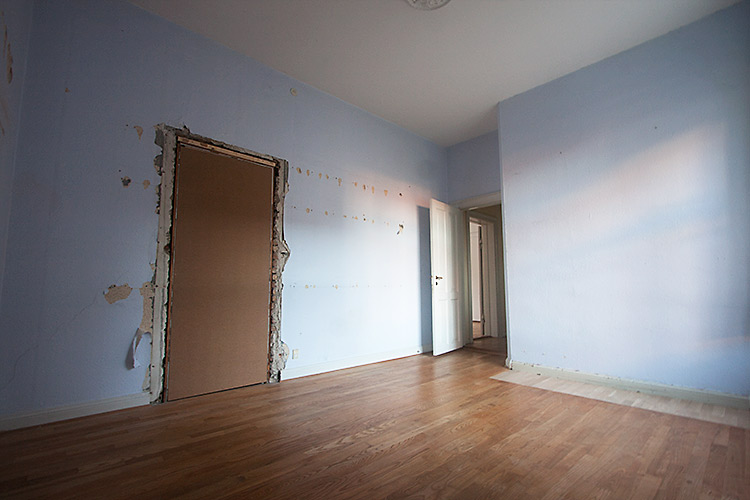 This room is my problem child. That doorway leads to another bedroom, which was probably intended as a nursery when the apartment was built. It wasn’t properly closed off, so our builder is bricking it up. When we looked at the place, it was covered by a bookcase. We’re not sure what the deal is with the bit of floor that doesn’t match, but we’re having it all replaced with herringbone parquetry. This was a tough call because traditionally herringbone parquetry would’ve only been installed in the public rooms, but I really wanted it in the bedroom, too. So I’m having it.

The wall near the weird bit of floor is actually a stud wall, which was a surprise. Apparently, the bathroom was extended at some point, which is hard to believe… you’ll see why in a minute. There’s something weird about the material they used, so the plaster keeps buckling. We’ll have to cover it in sheetrock, which sucks because I’m going to lose a couple of centimeters of moulding around the windows and it’s going to be difficult to hang a curtain rod. Fortunately, there are plans to build a balcony off the bedroom, so the situation should work itself out in not too long.

Renovating an Old Apartment: The Bathroom 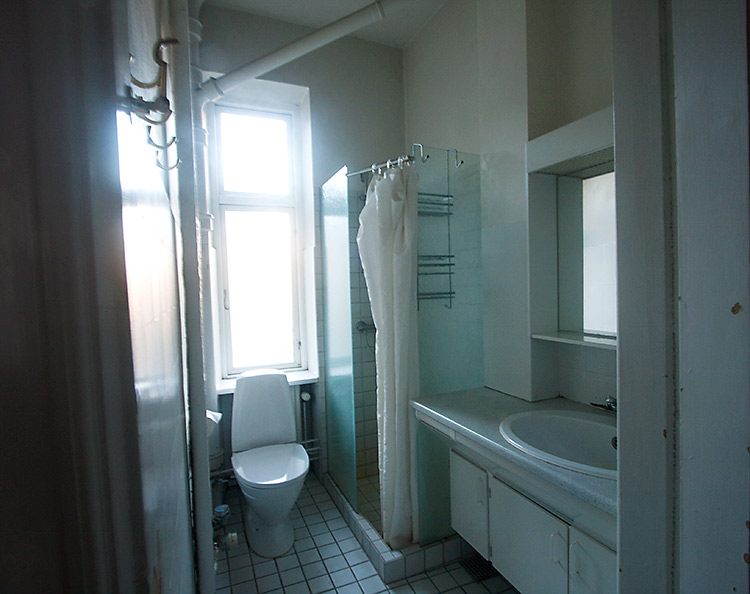 See what I mean? Can you believe this is an “extended” bathroom? If you follow my blog, you might remember that I said we were getting a clawfoot tub shipped over from England. That’s a no-go. Even the tiniest clawfoot tub is too wide for this horrible bathroom! If I’d known that I might not have bought this apartment. On paper, it was going fit, but given the plumbing configuration, it’s just too tight. I’ve threatened to put a tub in the kitchen like they used to do in those old “tub in kitchen” New York City apartments, but the owners’ association is talking about closing off the back stairs. The stairs are next to the bathroom, so hopefully it’ll happen and I can knock a hole in the wall and install the tub of my dreams.

Renovating an Old Apartment: The Kitchen 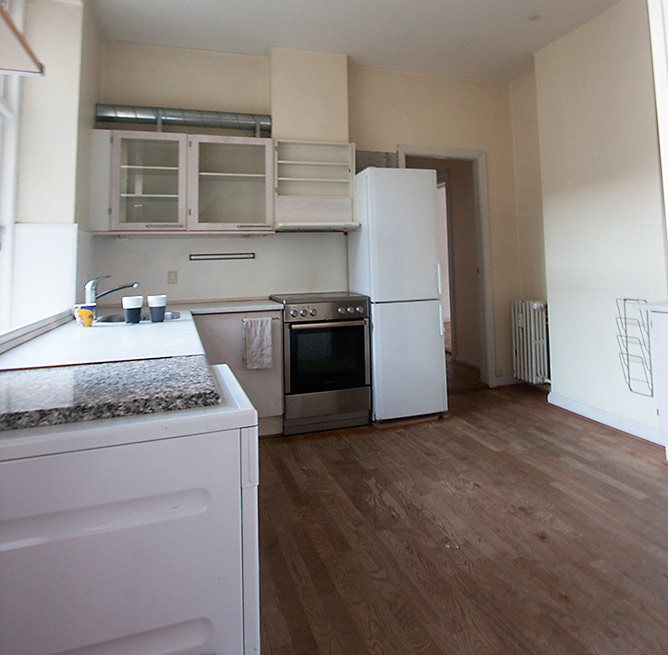 I deeply regret my decision to save the kitchen renovation until after we move in. I refuse to eat anything that’s been stored in that fridge or cooked in that oven. The kitchen reeks of grease and curry in a way that gallons of bleach can’t help and we found a box of rotting strawberries behind the washing machine. 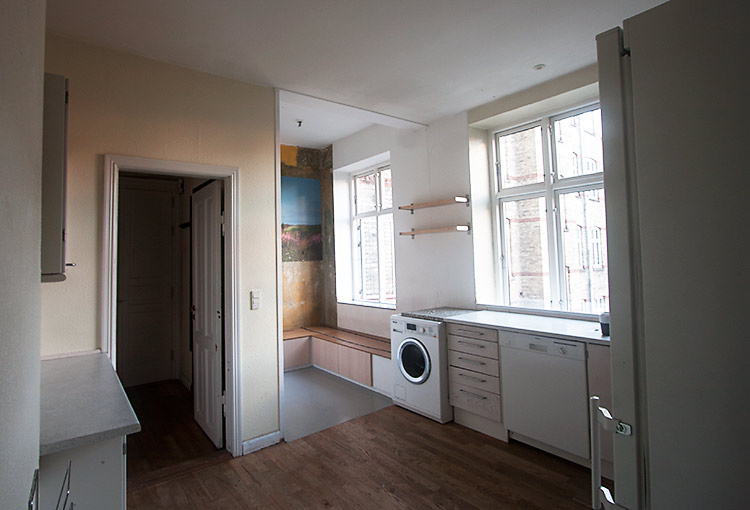 Yeah, the washing machine is in the kitchen and that’s the only place it can be. Welcome to Europe. We’ve budgeted either for the only model that is sized to fit within a standard kitchen cupboard, or to have custom cabinetry made. This kitchen is actually huge by Danish city centre standards, but the usable space for storage, work surfaces, and appliances isn’t very good. We also need to fit a dining table in here. It’s totally stressing me out. If you have a great idea for how to configure this kitchen, I’d love to hear about it in the comments :)

Pssst… those windows are 6 feet tall!!! And the ceiling has been lowered. It’s also been lowered in the hallway, so we’re removing the false ceilings and having the electrical work plastered into the original concrete ceilings. It’s gonna be a b*$ch to heat, but so gorgeous! 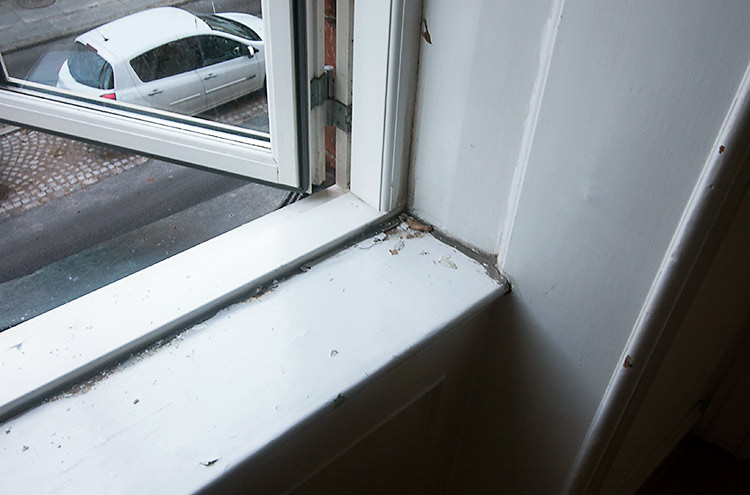 There’s peeling paint everywhere in this place! And its removal is charged by the hour. I’m freaking out a little bit! 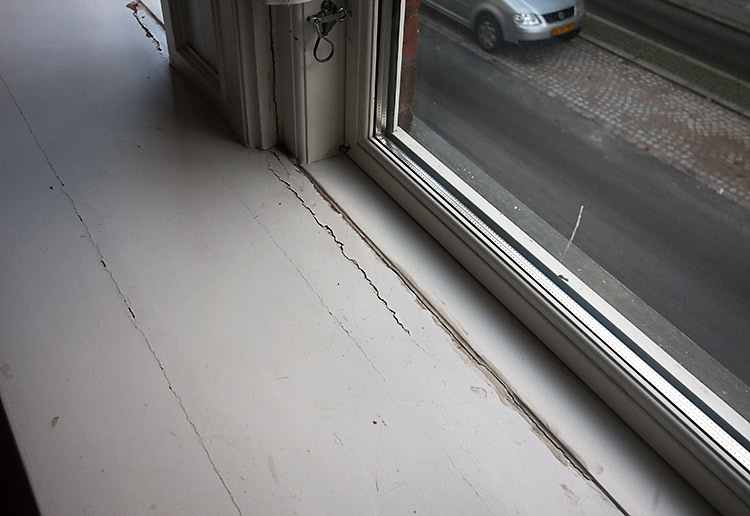 I’m counting the days until it doesn’t take me the better part of an hour to walk downtown and back, until I have a dedicated home office, until I don’t have a–hole kids living upstairs who play the drums and wake me up at like 7:00am seven days a week, and until there’s no old lady downstairs with an antique grandfather clock under our bedroom that chimes every f—ing hour, on the f—ing hour, every f—ing day!

That said and despite how much I loathe living here, Robert bought this place a little under four years ago and he’s realized a nearly 25% return on his investment. This makes my frugal, debt-averse heart happy! Even after paying the estate agent commission, etc., the profit will finance most, if not all, of the renovation work on the new place.