“Project from hell” falls short of adequately describing the home renovation nightmare Robert and I have been living for the past six weeks. We’d expected that by involving the contractors early (November 16) and being crystal clear about our hard deadline (January 31), that two and a half months would be plenty of time for them to complete most of the heavy lifting. But despite a strong start, the project went off the rails just before Christmas.

There’s a special place waiting in hell for our painter, the main contractor to turn our dream project into a full-blown home renovation nightmare. While he’d initially said that most of his work would be finished before Christmas, he told us on December 19th that finishing by January 31st would be pushing it. He was basically telling us that the job would be delayed by more days than his team had actually been working on it. How does that even happen?

Talk about incompetence! One of his guys had spent a whole day (charged by the hour) stripping a door using a heat gun and a blade, an unreasonable approach given the size of our apartment and the fact that every stretch of woodwork needed to be stripped of 118 years worth of paint. He also badly damaged the door, an original door from 1899, by gouging it with his blade in so many places that even a salvage yard wouldn’t want it. It was quickly obvious that this contractor didn’t have the competencies to deliver the job.

So on December 20th, Robert and I began the arduous task of stripping the paint ourselves. I’ll share our process later, but it involved covering the wood with a thick layer crystal soap or brown soft soap, covering it with plastic wrap, leaving it for 48 hours, then scraping off the layers of paint, using a spoon handle in the corners and ridges to ensure we didn’t gouge the wood.

With the exception of Christmas Day and New Year’s Day, we’ve been stripping paint 9 to 12 hours a day, every day since December 20th. I was so tired that the heel fell off of one of my shoes on the walk home one night and I was too tired to notice. I was also too tired to care that I was was out in public more than once wearing filthy shoes held together with with a rubber band. 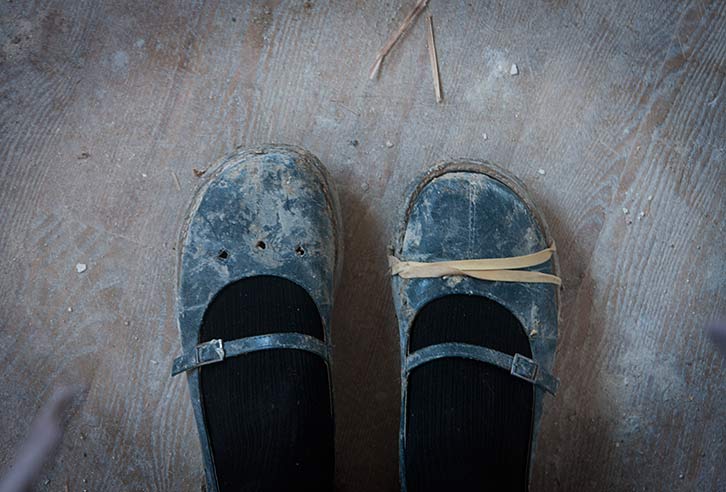 Of course, we’ve fired the painting contractor, but not before he’d lost the keys to our apartment and our building. The first time we spoke to most of our new neighbors, it was to tell them that one of our contractors had lost our keys and that we’d be having the locks to the building changed.

He insists that we owe him pretty much the full amount he’d quoted for the job, which included stripping paint/sanding the woodwork and repainting it. But we’ve stripped the paint ourselves and will be painting it ourselves! He also refuses to accept responsibility for the mangled door, saying that we could’ve damaged it, even though the rest of the doors (that we stripped) are as pristine as can be expected for their age. He hasn’t completed the plastering part of the job that was billed at a flat rate and paid for in good faith before Christmas. He also tried to over bill us by 100%, we only caught it because we were in the apartment stripping paint and knew when his guys came and left and exactly what they had done while they were there. I hope karma hits this guy and his business like a ton of bricks. I’d never treat a client like that and if I did, I’d deserve to go out of business!

I’m livid with the builder because he grossly overestimated the number of tiles needed for the bathroom and now we’re stuck with three boxes of flooring tiles and four boxes of wall tiles that haven’t been used and can’t be returned. I get that you have to order excess in order to account for breakage and mistakes, but not like 50% more! Seriously? This is what the guy does for a living!

Being so consumed with stripping paint, other parts of the project suffered. For example, we didn’t choose our bathroom fixtures until well into January. The fixtures are coming from England, the sink and toilet are made to order, the shower mixer is currently on a ship in the middle of the North Sea, and we need a custom-made shower curtain rail (which we haven’t ordered yet) because the space is too small for a standard size rail.

We’re moving in tomorrow and this is the current state of our bathroom, nothing will change between now and then. 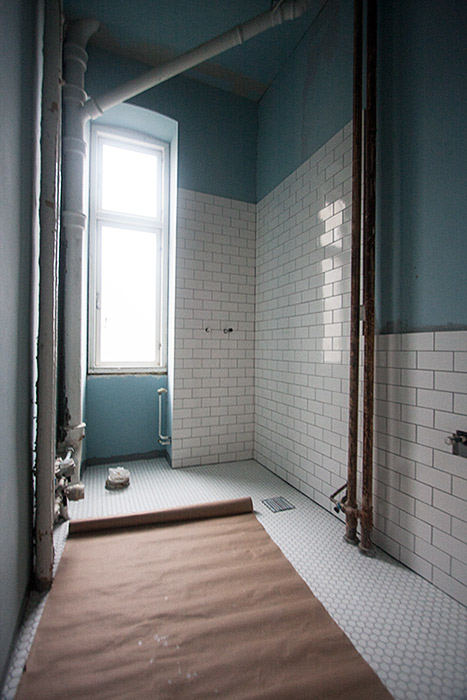 Another home renovation nightmare, the floors…

We’d contracted for the new floors back in November and the contractor knew that we had a hard deadline of January 31 for all of the floors to be finished. Last week, he told us that he’d hired in additional contractors in order to be sure he could meet our deadline. As of today, we have subfloors, but the herringbone parquetry will be installed, sanded, and varnished after we move in!

According to the installer, who is one of a few in Denmark trained to install herringbone parquetry, the subfloor needs a lot of leveling work before he can install the floor. So basically, the guys who installed the subfloor dropped the ball and as a result, it’ll be 2 to 3 weeks before the floors are finished.

This is the current state of our bedroom, nothing will change between now and when we move in tomorrow. 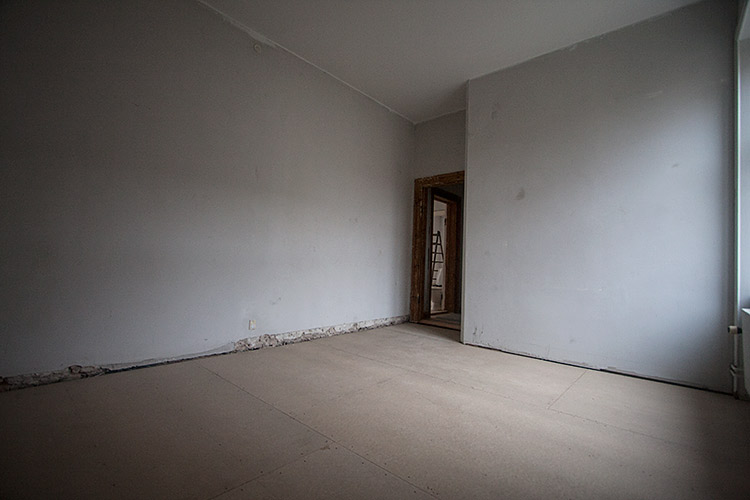 And this is the current state of my office. Again, nothing will change between now and tomorrow except that this room will be full of boxes and furniture that can’t be put away until the floors are finished. Remember, I work from home… 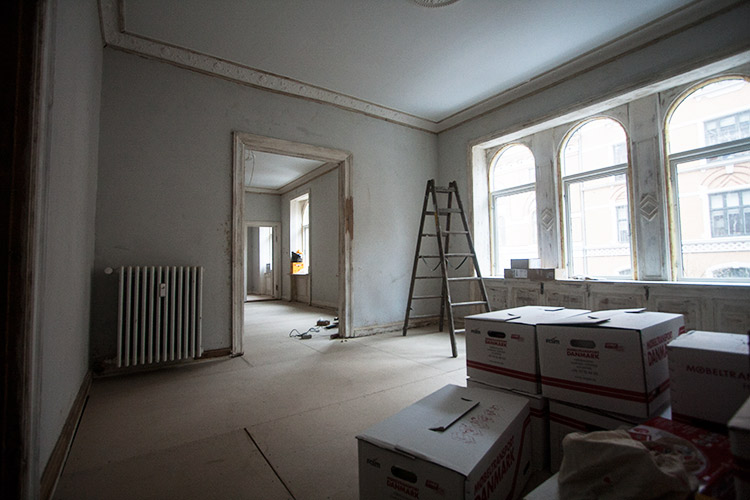 And the current state of the living room, which has the lowest priority and will be the room we live in as the rest of the rooms are sorted out… 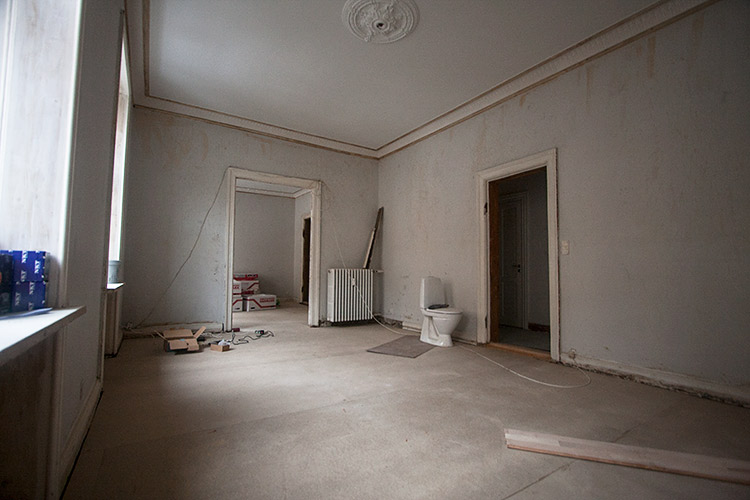 Thank goodness we had the foresight to keep the old toilet! It’s not plumbed in here ;-)

Deciding to hold off on renovating the kitchen was an inspired choice! But on a project of this scale, it’s nearly impossible to keep any of the rooms completely off limits. The ceilings in the foyer, hallway, and kitchen had been lowered and we wanted to restore them to their original height. Because of the electrics, they all had to come out in one go, but I don’t know how the new kitchen will be laid out, and they can’t plaster the ceilings until I figure out where the light fixtures will go. 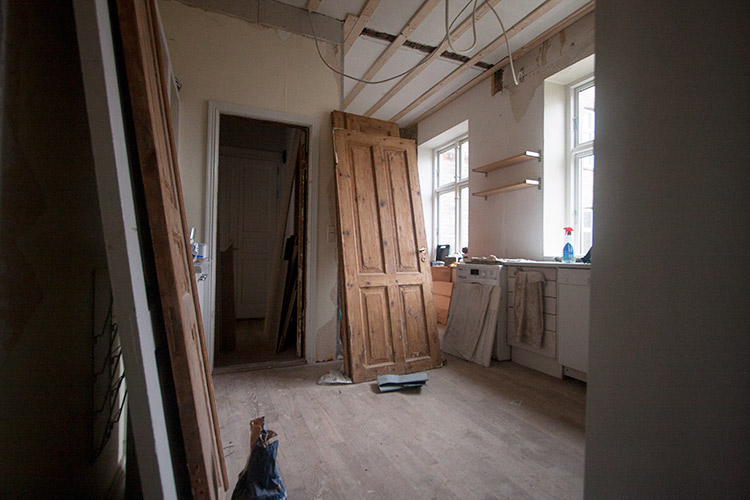 So, in the meantime, We’ll have to deal with stray wires, rafters, missing plaster, and a stack of plasterboard (for the ceiling) in the corner.

Oh, and one of the carpenters lost his balance on a ladder and fell through our cooktop. 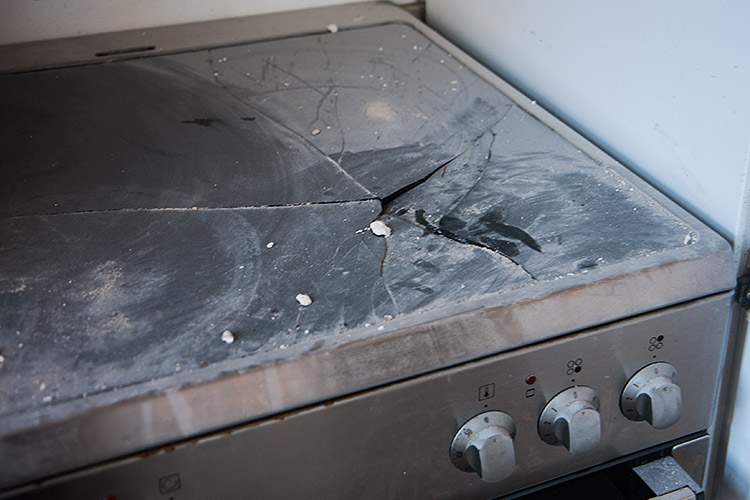 I’m glad he didn’t get hurt but I can’t replace the stove anytime soon because the renovation plans include a dual fuel range and we don’t have space for a gas cylinder in the current configuration. So for now I’ve got two burners I can use until they catch fire or electrocute me… whichever comes first ; -)

So, home renovation nightmare or not, we’re moving in tomorrow. We have to hand over our current place to the new owners by 9am on Wednesday, so we have no choice.

Being so tied up with stripping paint, we haven’t had time to pack. It’s going to be a throw everything into boxes and sort it out later sort of event, which I’d wanted to avoid like the plague.

Despite turning out to be a home renovation nightmare of epic proportions, it’s been nice spending so much time with Robert. Stripping paint is meditative in a way and we’ve had a lot of great late night conversations fueled by coffee mugs full of wine. 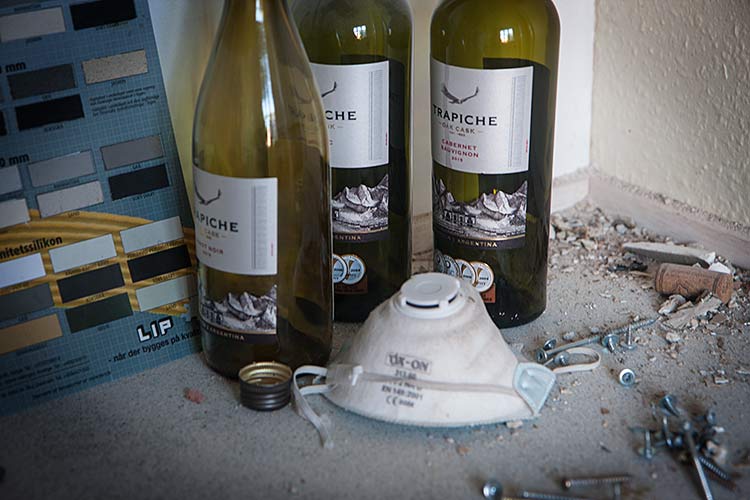 The bottle collection got a bit embarrassing…

But cool things happened, too. Like one day, one of the workers showed up with a three month old kitten! It was his daughter’s kitten and it had somehow gotten inside his van without him noticing until he was onsite, so he asked if it was ok to keep the kitten in the apartment, so of course I said “yes” (and cuddled it pretty much all day).

And one night as we were walking home in the wee hours of the morning, we caught a rehearsal of the light show and viking ship procession for the European Capital of Culture 2017 opening ceremony. You can watch a short video of the opening below… we were there and it was absolutely magical! I fell in love with this crazy little bohemian city just a little bit more that night.

And the woman who restored the crown moulding in my office and the living room was a true artisan. I can’t wait share that part of the project!

Doing so much of the dirty work ourselves totally gave us street cred with the contractors. In time, I think we’ll be glad that we actually did some of the work on the place ourselves, but there’s a reason we hired contractors. Because of this all-consuming home renovation nightmare paint stripping project, we’ve both been neglecting our day jobs, we pretty much missed Christmas, and I haven’t had the time I would’ve liked to plan the details of the bathroom. It’s actually a miracle it’s coming out as well as it has.

The crown moulding restoration is the only finished part of this project. There’s still electrical work, plastering, sanding, patching, varnishing, tiling, and plumbing to be done. My main personal priority for the rest of the week is to create a sense of normalcy amid the chaos. So we don’t have curtains and can’t currently hang curtains, I’ll position the bed between the two living room windows. We may need to flush the toilet with a bucket, but at least we have a toilet. I can work anywhere with a laptop and an internet connection… home renovation hell ground zero is no exception. There will be dinner every night and coffee and tea in the morning. And if it sucks too much, we can go for a walk.

Even though we have our work cut out for us, we’ve never once wished that we hadn’t bought the place. If my blog is as quiet as it’s been recently, you’ll know why. But I’ll keep updating Instagram and Facebook :)