We’re still curtain-less, living out of boxes, showering with a hose, and cooking on a shattered cooktop. But this quiet street, right here in the middle of this seriously cool city, surrounded by old buildings and cobblestone streets, this is our little slice of heaven.

And we’ve just finished restoring our apartment’s (mostly) original c.1899 (and completely gorgeous!) crown molding. Despite its sorry condition, this crown molding totally had me at hello…

Its original pattern was indiscernible beneath the 100 or so years’ worth of paint that had been slapped on by previous owners and landlords. 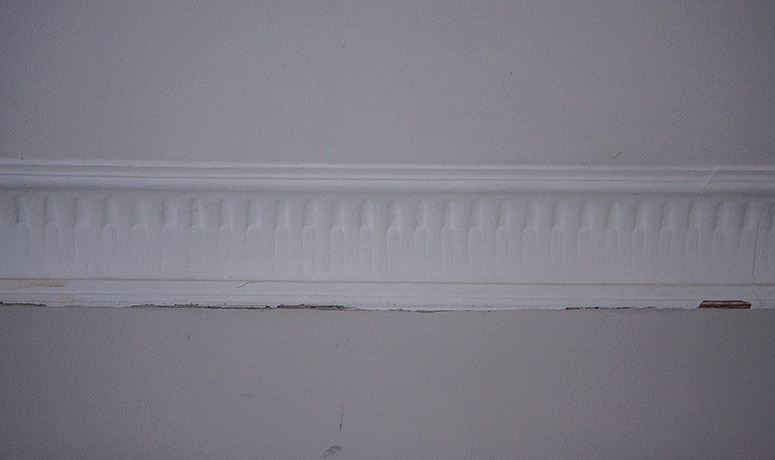 Fortunately, we found a restoration expert named Anne Mette who’s experienced with many aspects of building restoration, particularly restoring old crown molding. Anne Mette has worked on building restoration at Aarhus’s living history museum, Den Gamle By, and she specializes in restoring stately homes. Not that our apartment is even close to being a stately home, but we needed a specialist in restoring old crown molding in order to take it back to the standard it deserves.

Once Anne Mette identified that she’d be restoring old crown molding made of papier-mâché, she gave us a two options:

As a conservationist, she preferred the second option, but it was also the most expensive and she was completely cool with making a replica. In a project of this scale, assuming you have the budget of mortals, you have to be pragmatic about where you spend your money. We chose to prioritize restoring old crown molding in both my office and the living room because it’s one of the features we love most about the apartment, and tearing it out, even to replace it with replica crown molding, just felt wrong. 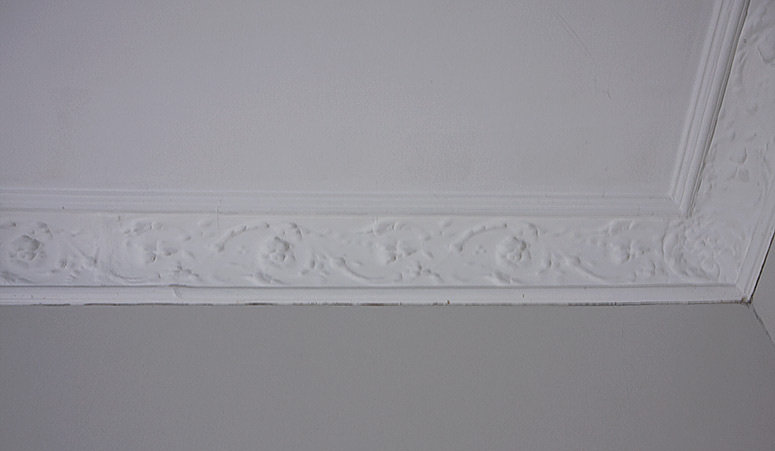 Using a blade, Anne Mette painstakingly removed 5mm worth of paint from the old crown molding in the two rooms to reveal their original patterns and as she called them, “the secrets of the building’s history”. 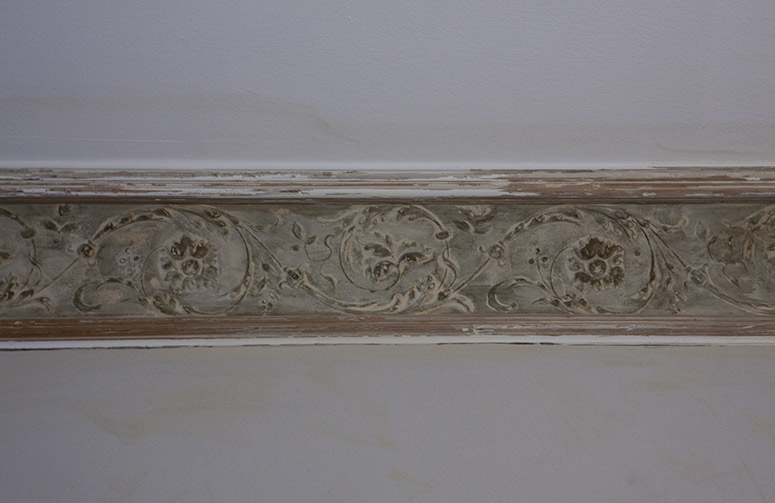 One of these secrets was that the crown molding in my office was originally painted green and gold. Early one morning, she sprayed it with water to give us a glimpse of how it had originally looked.

In stripping the rest of the surfaces ourselves, Robert and I discovered that the doors and the woodwork in my office had originally been painted green and gold to match the old crown molding. And at another point in time (probably in the 1920s-30s), they’d been painted black.

We could always see that the molding in my office had a floral motif, but the pattern of the living room molding perplexed even Anne Mette. 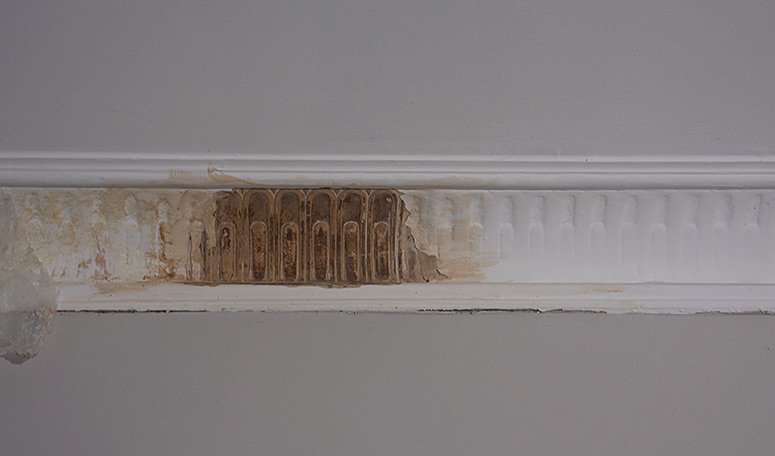 When she finally started stripping the paint, she discovered that the old crown molding in the living room had a classical pattern and that it wasn’t original to the room, but had most likely been added during the 1920s.

She said that originally around the turn of the twentieth century, guests would’ve been received in my office and wouldn’t have been invited into the rest of family’s home. But in the 1920s, things became more relaxed and she suspects that the crown molding was added then in order make the room more formal and appropriate for receiving guests. 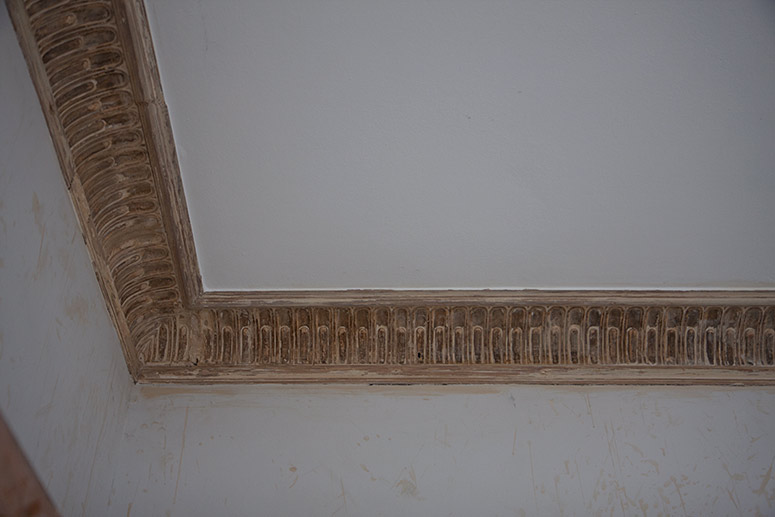 She also discovered that this molding, along with the ceiling, had been painted bright yellow in the late 60s/early 70s. This didn’t shock us since we know that the apartment across the hall used to be a hippie collective. I have pleasant visions of this building being like a Haight-Ashbury Victorian in the 1960s. 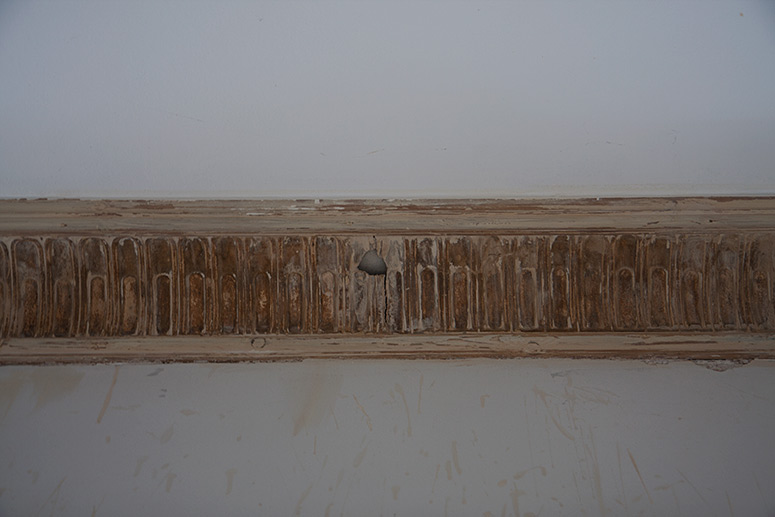 After Anne Mette had removed all of the paint, she repaired the broken bits using papier-mâché. 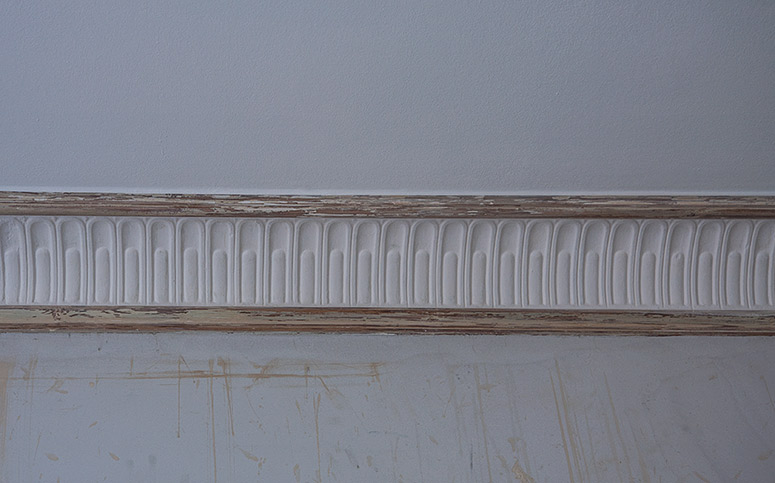 Then she made her own lime paint in the same way it would’ve been done in 1899, and repainted the molding in both rooms. 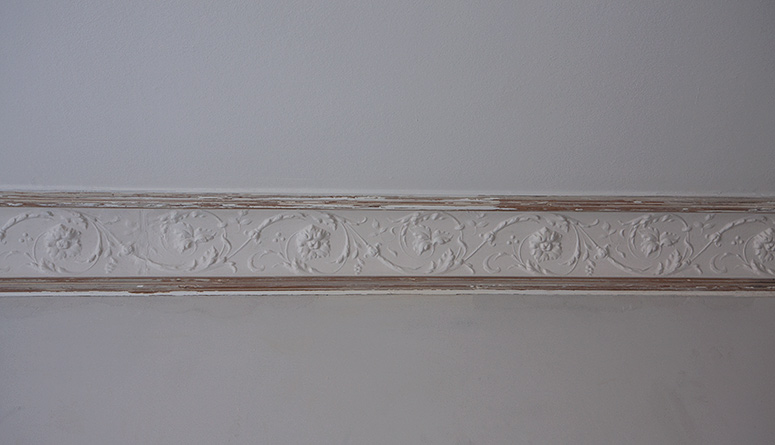 We’re going to paint the rails ourselves in gloss white in order to draw attention to the molding, which she thought was a fantastic (if not historically accurate) idea. 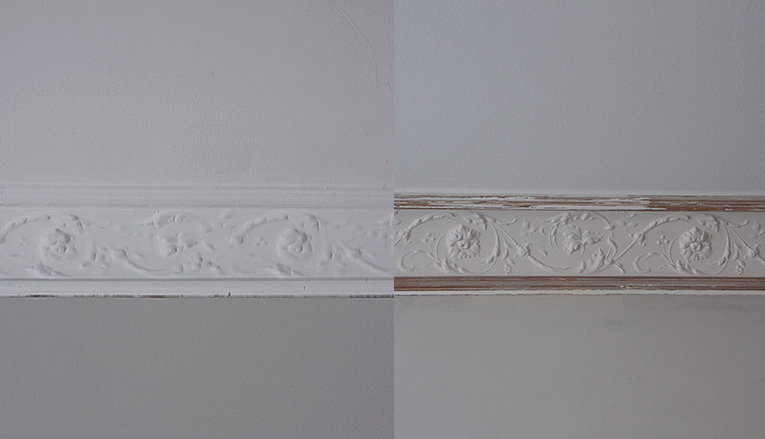 By talking to some of our neighbors, we’ve found out that most of the original crown molding in the building is in the same sorry state as ours was. Worse yet, it’s actually been torn out of some of the apartments during blasphemous renovations! 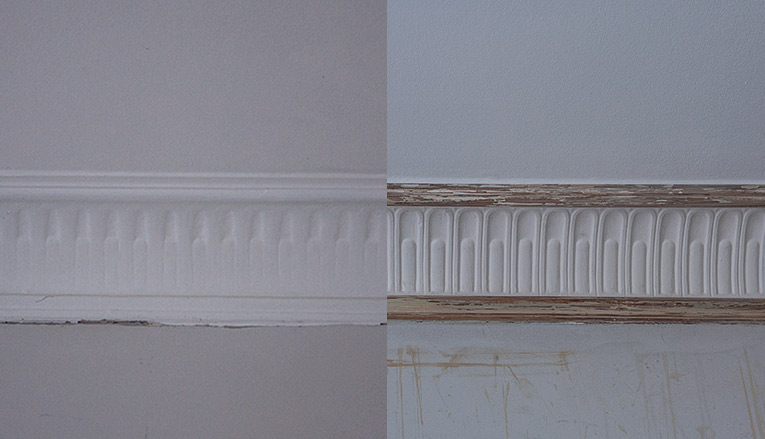 And some of the apartments have lowered ceilings throughout! Once we got into the project, we noticed that the ceilings had been lowered by about a foot in our kitchen, foyer, and hallway. That was a bit of a nasty surprise. But, much stress, mess, and cash later, we have ten and a half foot tall ceilings throughout the entire apartment, which makes the space seem almost palatial (by old European city centre standards, anyway).

This place really was a steal… priced to sell because of its condition, one of the few apartments left with most of its original features intact, and one of the best locations in town. But OMG, some days we think this project is going to kill us!

While most of our contractors have been a nightmare (you should see the tiling job in the bathroom!), Anne Mette is a true artisan and I’m so happy our paths crossed. When I’m beyond sick of showering with a hose, eating dinner standing up in the kitchen, and having subfloors instead of actual floors, I look at our gorgeous crown molding and imagine the beautiful things that are to come.