But before I get to that, I’d like to explain my long, unannounced, and unplanned absence from blogging. As I’d written back in January, the work on our apartment hasn’t gone as we’d expected. Unfortunately, it’s been off the rails ever since. After firing all of our contractors, we’re DIY-ing as much as we can and will deal with the rest as it comes. If we’d had a crystal ball last October, we’d have held out for a place in better condition because a crazy DIY fixer upper project was never on our wish list.

But we’re trying to focus on the prize and I’ll tell the sordid tale in serial format when I finally have some before/afters worth showing. For now, suffice to say that we’re cooking on a hotplate, showering with a hose, and still using a duvet in lieu of curtains in the bedroom.

At the same time, my freelancing business has exploded into a seven days a week gig with few exceptions. Robert is also working more than full-time and preparing to submit the dissertation for his next (highest) level doctorate.

With all of that going on, is it any wonder that 2017 has so far pretty much gotten away from me?

So… Seven Years of Living in Denmark as an American Expat

This past year, first with Brexit and then with the US election, various mass shootings, terrorist attacks, and instances of racism and police brutality, has really put things into perspective. After seven mostly difficult years of living in Denmark as an American expat, I’m a sure as I can be that I’m never moving out of Denmark. Seriously, they’ll have to pry that permanent residence permit from my cold dead hands.

I knew going into the move that living in Denmark as an American was going to be a challenge. When I first (reluctantly) agreed to relocate, I thought it would be for three years, max. But because my work contract was changed to open-ended, getting the company to move me back to the US wasn’t nearly as straightforward as moving over. I spent most of years three to five feeling trapped, isolated, and frustrated. Fortunately, things have worked out for me and I don’t regret moving and all of the struggles that living in Denmark as an American expat has brought over these past seven years.

I’m past whining about the (insane) taxes and pay up my 8% so that everyone can have healthcare. Robert and I both have pre-existing conditions and being self-employed, it’s been a luxury not worrying about health insurance. And when one of our pre-existing conditions needs emergency attention, an ambulance, paramedic team, and doctor show up in less than five minutes… and we never see a bill. 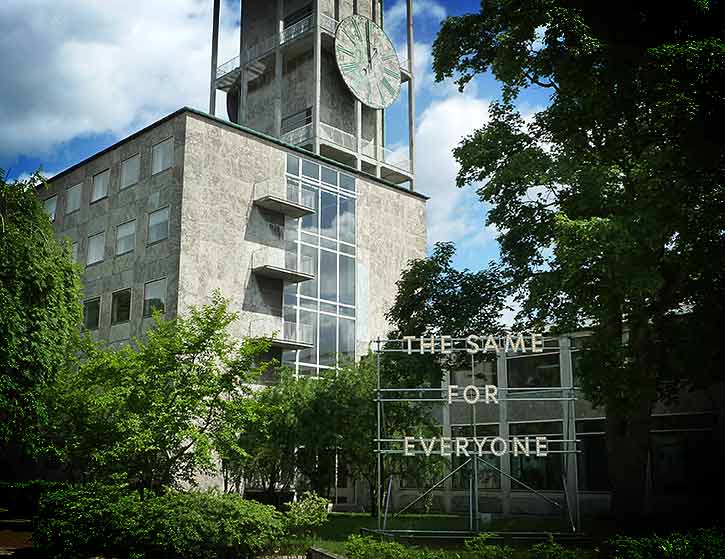 In true Danish style, that’s an Arne Jacobsen clock on the City Hall in the background :)

This sign recently popped up at a park Aarhus. At first, I wasn’t sure how I felt about The Same For Everyone. After a lot of reflection, I agree with it on balance and it’s one of the things I’ve come to love about Denmark. There’s a baseline of “the same for everyone” concerning healthcare, education, and basic needs. After that, it’s up to the individual. I’m totally on board with that even if it means having less in Denmark than I might have in another country. Really, how much disposable income does one person need?

A few years ago, I would’ve had at least 101 reasons why everyone doesn’t deserve the same. Now I’ve come around and in my experience living in Denmark as an American expat, I believe that having everyone’s basic needs met creates a better and more peaceful society. I’ve written before about how I walk around at night (winter is practically one very long night) without worrying about being robbed. Panhandlers pretty much don’t exist here and any Danish citizen who’s homeless is (literally) homeless by choice. I recently read a statistic that there’s no US state in which someone working full-time for minimum wage can afford a two bedroom apartment. I just can’t comprehend that.

Robert and I often say, “say what you want about the taxes, but Denmark just works.” In exchange for paying high taxes, we live in a country that functions extremely well. For example, the IRS requires a specific form issued by the Danish government in order to claim an exemption from US self-employment tax. According to the IRS website, this form must be requested via snail mail to an address in Denmark. When my first request was returned as undeliverable, I contacted the IRS and was given another wrong address. After much frustration and many phone calls in Denmark, I finally tracked down the right place and submitted the request by email (because everything in Denmark is online). I had the form in hand two days later and a few days after that someone called to make sure I had what I needed. That’s Denmark in a nutshell.

Btw… I haven’t even flown over US airspace in nearly 6 years yet I still have to file a tax return and disclose my bank accounts to the IRS. How ridiculous is that? After seeing how much self-employment tax I would’ve owed to the IRS, Denmark actually looks like a bargain. Between the cost of health insurance and self-employment tax on top of US income tax, I don’t think I could afford to be a freelancer in the States.

Aarhus is called the city of smiles and for good reason… there are quirky little things like this all over the city.

Living in an international city like Aarhus is so very different from where I lived in the beginning. I’ll always feel like an outsider and paying attention to the immigration debate will always make me feel unwelcome. But is it any better for foreigners living in America, or anywhere else? I do my best to separate politics from my daily life and tune out the immigration debate because I have permanent residency, my own business, and have managed, despite myself and many roadblocks, to build an awesome life with an awesome man in a country that’s foreign to both of us.

The peculiarities that drove me nuts in the beginning don’t really register anymore. I barely even remember the things I used to miss from home (except a bathtub… I still very much miss having a bath). My last grocery shop (I shop daily) consisted of rugbrød, koldskål, and a type of Danish breakfast cheese… it doesn’t get much more Danish than this! 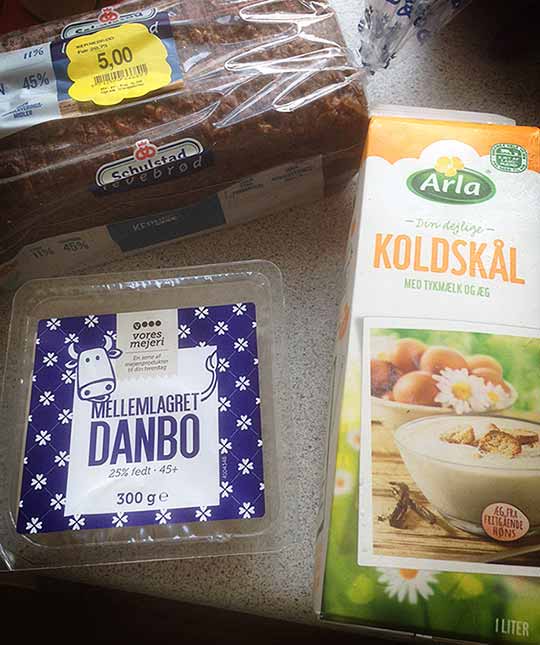 Advanced level bargain hunting! I paid around $4.50 for this, which is roughly half price.

Aarhus has a distinctly bohemian vibe to it, which complements Denmark’s overall laid-back vibe very well. On Pride Weekend, 7-11 gave out rainbow flags, the city busses flew the rainbow flag, there was a parade, and this awesome bench popped up in the park near our apartment. The live and let live attitude of the Danes suits me down to the ground. 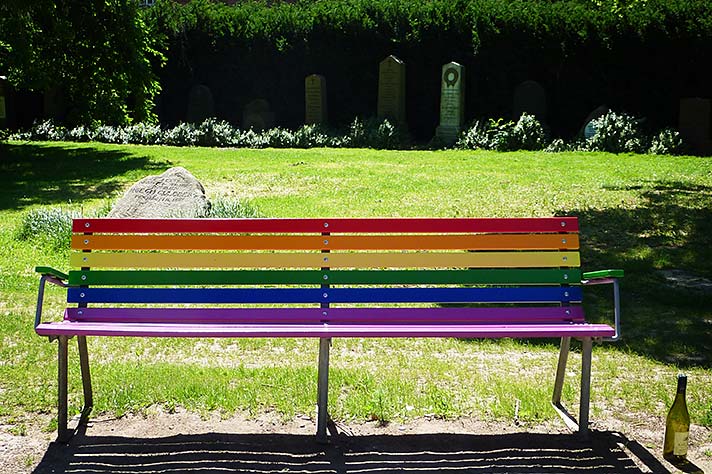 This bench brings glee to my c.1990s fag hag heart!

Despite the chaotic state of our apartment, life is good. Robert is a perfect partner in crime. I live in a country I trust and in a city where I feel safe. I’m clearly foreign but I don’t fear the police. I’m making a living doing something I love and I get to sleep in and work from home with my cat pretty much every day. While Denmark may never truly feel like home, I’ve fallen in love this crazy little country! Its ideology matches my values and it’s treating me well on balance.

A few years ago  I wouldn’t have believed that I’d end up here, but life is an interesting journey. You can read more about that in my past “anniversary” posts here… first year, second year, third year, fourth year, fifth year, sixth year.

The Future of Sage & Simple

I’ve been back and forth on whether to keep on blogging or close up shop. Writing and editing full-time for clients has drastically cut into the time I can spend on my own projects and I feel like I’m either working on projects for other people or working on the apartment.

The thought of not blogging at all doesn’t feel like the right call. So for now, I’ll just see how it goes. After a long dark winter, it feels like the light nights of Danish summer are giving me new energy :)