As if being dumped by my husband less than three years into our marriage wasn’t horrible enough, I was living in a country where I don’t have a local support system. All while having to decide within like a week whether to stay in Denmark or move back to the States. I had to quickly let go of the pain and anger, and get on with the process of accepting divorce and moving on from the rubble of my whirlwind marriage.

Moving Back to America

My first inclination was to hightail it back to the States. I felt comforted by the thought of returning to my tribe to go through the process accepting divorce and moving on. My sister was adamant that she’d fly to Denmark to bring Opie and me home. “You will not leave alone and defeated,” she’d said. She’d offered a spare room and unlimited room service and TV shows to binge until I was ready to face life again. In the first days of this catastrophe, that was everything.

In a haze, I contacted moving companies, looked into the requirements for moving Opie back, tested the waters to see if my clients would still work with me in the States, researched US health insurance and the tax scheme for freelancers, looked into how to form an LLC, and called upon pretty much everyone I knew who could possibly help me to land without crashing and burning. People pitched in without hesitation, seeing what they could do to make my transition home as easy as it could be, if that’s what I decided to do.

But deep down, I knew that moving back to the States would be a knee jerk reaction ending in regret. The rental prospects there were abysmal. Health insurance is a debacle. And with 14% self-employment tax on top of state and federal income tax, who can afford to be a freelancer? I love my gig economy lifestyle and won’t easily sacrifice it in order to reenter the rat race.

The only good thing to come out of this dumpster fire of a marriage is that I have permanent residency and can stay in Denmark for as long as I want. Thank goodness for that!

So, on the Sunday afternoon following the Friday morning valuation by the realtor, I went to an open house for a small apartment in the Latin Quarter (my dream location). I thought I’d be up to it, but as looked around the apartment, my heart pounded hard enough that I was sure everyone could hear it, I felt lightheaded, out of breath, and like I’d been kicked in the stomach. I fled the apartment and hurried home sobbing behind my sunglasses in the rain.

Aarhus is a major student city with a serious housing shortage. Rentals are like gold dust that’s mostly shared among friends. Friends who aren’t part of my immediate demographic. My chances of finding a solo rental (because who wants to be twice divorced at 42 and suffer the added indignity of having roomates?) on his majesty’s expedited divorce timeline were somewhere between slim and none.

Despite recent history, I’m still a frugal and simple living girl at heart, and a modest two room apartment (with original vintage features, of course) would have been perfect. But November was an awful time of year to be shopping for real estate and the more I looked, the more depressed I got. There was so much pressure to “make a decision either way” and to get on with the process accepting divorce and moving on that I didn’t eat for like four days and didn’t have the brain power to work. I was pushing deadlines for the first time ever in my career.

Then a week to the day that he told me he was having our apartment valued, the perfect apartment hit the market! It’s in Frederiksbjerg, which is considered the most desirable area of the city by most Aarhusians. I’d actually prefer to live in the Latin Quarter or smack bang downtown where where our supposed “forever apartment” is, but given my disdain for the guy who now owns it, I’m quite okay with living in the other end of the city. Coincidentally, it’s in the neighborhood that he prefers but that’s neither here nor there. It’s a sound investment.

But I knew it was home as soon as I walked in. It was the perfect place to regroup, to get on with accepting divorce and moving on with rebuilding my life. Built in 1911 and with its decorative plaster ceilings and dentil moulding still intact, it’s the stuff my single-again housing dreams are made of! It has a big, beautiful balcony, the original hardwood floors, an exposed brick wall in the bedroom, an adorable kitchen, and clever storage space. It’s a tiny 62 square meters and the (private) bathroom is actually in the back stairway, but it’s pretty and quirky and I love it! There’s even a radiator under the front window for Opie to sleep on in the winter! And it’s an owner-occupied building, mostly occupied by couples and singles. So the building is quiet and well cared for.

Accepting Divorce and Moving On

I’m full of resentment for all of the vintage things I’ve sold in order to meet his majesty’s aesthetic because looking back, I made a whole hell of a lot of compromises while he pretty much made none. But this place will be mine (and Opie’s) in a way that the big downtown apartment never would’ve been. There’s no doubt that it would’ve been stunning when it was finished, but it never would have been me. This apartment has just the right amount of patina and it’s begging for threadbare velvet furniture, lace curtains, fairy lights, plants, fringes, and everything else that I think makes a home a comfortable and enchanting place to be.

So despite many ups and downs, I’ve finally, after seven years, managed to settle into this crazy little country and even fall in love with Aarhus. And while I was devastated by his majesty’s abrupt departure from my future, this is just one more thing I can add to the resume of my life. I’ve proven that I can move to a foreign county alone, establish a life, quit the job that initially brought me here, start a successful business, fall in love, suffer the worst betrayal imaginable, and still be standing strong. And that tells me everything I need to know about who I am and what I’m capable of. 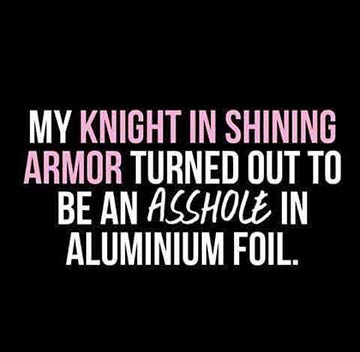 And I have incredible friends who send me things like this to wake up to :)

Today is actually a year to the day that we moved into our big “forever apartment” downtown. When he first sprang the divorce on me, I truly didn’t know how I was going to survive such a loss. Fortunately, in the months that followed, my knight in shining armor proved time and time again that he was in fact just an asshole in aluminium foil.

On the day I moved out, he had a locksmith come to change the locks at precisely the same time my movers were scheduled to show up. True story.

Check back in a few days for the realtor photos of my new apartment!

You can find the first article in this story here, and the second one here. You can see the realtor photos of my apartment here.