I made this cheap soup recipe over the weekend and thought that the eve of the one-year anniversary of my last post might be an excellent time to come out of my unannounced retirement and share it with you!

In this economy, who can’t use a delicious and cheap soup recipe? So here’s a good karma recipe that feels like hygge in a bowl.

It makes quite a bit, so come hungry or invite your friends. It’s perfect to have simmering as people arrive for the holidays, hungry from traveling and in need of something hearty and comforting but not heavy.

During this time in my life, when I had a big group of international friends, this soup was often on the menu along with copious amounts of boxed wine chosen by our French friends. Those days usually ended with a late-night music jam and dancing in an empty parking garage that we liked for its acoustics.

The guy who created this cheap soup recipe was an eccentric, and his wing of bat, eye of newt cooking was some of the best I’ve ever tasted. When I’d ask him to make something again, he’d say, “I can make you something close, but I cannot make this again.” He had a kind soul and a magic way with food – but no recipes — so he’d invite me to drink wine and watch him cook. I took a lot of notes.

So here’s the eccentric (Norwegian) guy’s cheap soup recipe — or if we want to put some lipstick on it, “root vegetable stew.” I officially call it “Norwegian soup” in honor of its creator. Make it vegan it by leaving out the creme fraiche and using oil or vegan margarine instead of butter.

The measurements are mostly metric and by weight. Hopefully you have a kitchen scale handy.

Norway called it “soup,” but it’s very thick — actually more of a stew. If you prefer a more soup-like experience to a thicker stew, I’d suggest reducing the carrots, parsnips, potatoes, and cabbage by about 100 grams each. But I think it’s perfect as it is :) 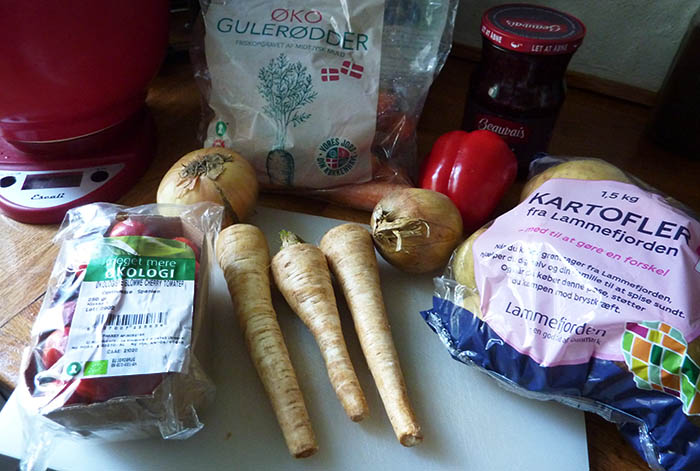 Melt the butter and spices together in a big pot (mine is 6 liters). Gradually add the flour, stirring to make a roux. Add water to thin, and continue to whisk-in water until it’s a thin base.

Add everything except the salt and creme fraiche. Add water to fill the pot about 4 inches from the top (you’ll want to leave space for the creme fraiche, if you’re using it). Simmer until the root vegetables are tender, the lentils are cooked, and the broth has thickened. Make sure to stir it every once in awhile to keep the lentils from sticking to the bottom of the pot. 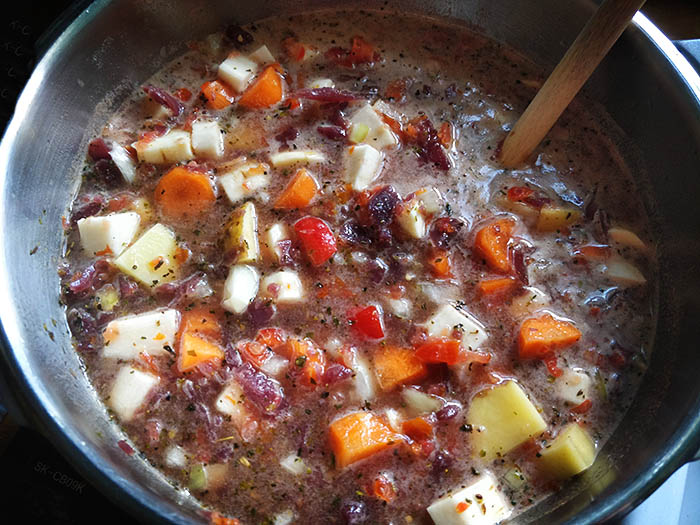 Temper in the creme fraiche (or skip it), add the salt, and adjust the seasonings to taste.

This soup is best if you slow-simmer it for several hours. If you’re not a fan of lentils, you can use pre-cooked black or cannellini beans (or whatever you prefer), just use more like 2 cups and add them toward the end. I use whatever I have the most of, but I like the convenience of just adding some lentils and leaving it to simmer.

I don’t know what the deal is with the 1/4 cup of red wine. I’ll add it if I have an open bottle — but I don’t think the soup suffers from leaving it out. 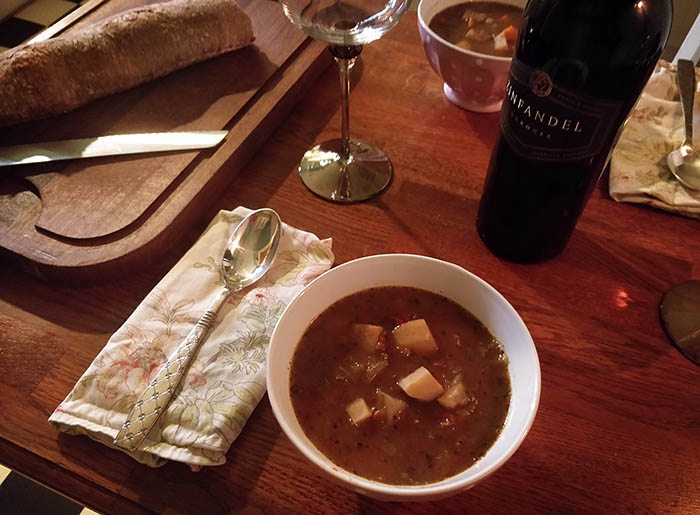 I’ve simplified the cooking a bit. Norway added the ingredients at like 8 different times. I’ve cooked it his way and my way, and I can’t taste a difference.

Just make sure that you stir it clockwise to infuse it with happiness and good health, preferably while listening to good music (maybe some Chet Baker or Iron & Wine). I didn’t make these rules ;-)

All ready for pinning :)

A Note About Two of the Ingredients

(Psst… Those were affiliate links. I’ll get a commission if you order sweet chili sauce, pickled cabbage, or anything else after clicking through. As much as I’d love a commission, I’m sure you can find both ingredients much cheaper locally.)

We’re a family of three!

I’ve been doing quite a bit of volunteer work over the past year. Part of this has been fostering abandoned cats and kittens. Last month, I adopted a bonded pair of kittens who came to me as tiny, traumatized fosters. I never thought I’d adopt another cat after Opie, but these sisters chose me and now we’re a cozy little family of three and I can’t imagine my life without them :)

I’ll be back when the spirit moves me. In the meantime, I’m enjoying a simple and happy life in private — along with the freedom of not having to document it.